by Tibi Puiu
in Research, Science, Studies
Reading Time: 3 mins read
A A
Share on FacebookShare on TwitterSubmit to Reddit

Girls like pink, boys like blue. Girls have long hair, boys have short hair. And so on, so on – my mom says this is all common sense, I say this is social programming that propagates stereotypes, and the latest research relating to this is a study called Math–Gender Stereotypes in Elementary-School Children recently published in Child Development that refers to the common stereotype that boys are good at math, whilst girls aren’t. The research introduces the reader with some facts, like the common conception in the US that girl can’t do math found both in grade school children and grown-ups (the study is targeted for the US, but this is a stereotype common all over the world). It is believed that simply because of this there exists an immense gender gap in mathematical related fields and science.

To scientifically test this “assumption”, researchers used “implicit stereotype” theory, that is to say they tried children with simple tests to assess their conceptions unconsciously, as opposed to “explicit stereotypes” if they would have just asked children whether they believed girls can’t do math. What they used to test their theory was the Implicit Association Test (IAT), which measures how much we associate concepts without knowing, or without being explicitly aware that we do, such as associating “math” with “boys”.

More explicitly, this is in short how the experiment was conducted: children were put in front of a computer screen where two columns were displayed – boys | girls. In the first part of the test the children were presented with names, which they had to align to each column appropriately, this was the warm-up. Then they were presented with two different columns – MATH | READING – in which children were asked to sort the terms appropriately (addition, number, math, read, book, letters). Then for the last last test, children had to complete it in two condition. In the first condition, they were asked to sort on the BOYS column all the math and boy names related terms, while on the GIRLS column all the reading and girl names related terms. Then in the second instance they had to do it vice-versa.

Results were compared, and researchers found that in the first instance children completed the test a lot faster than in the second instance. The idea behind the IAT test is exactly this – because of the implicit stereotype boys could easily sort math to boys, but at the same time they had a tougher time sorting them the other way around, because confusion arose. Here’s a graph below detailing the results. 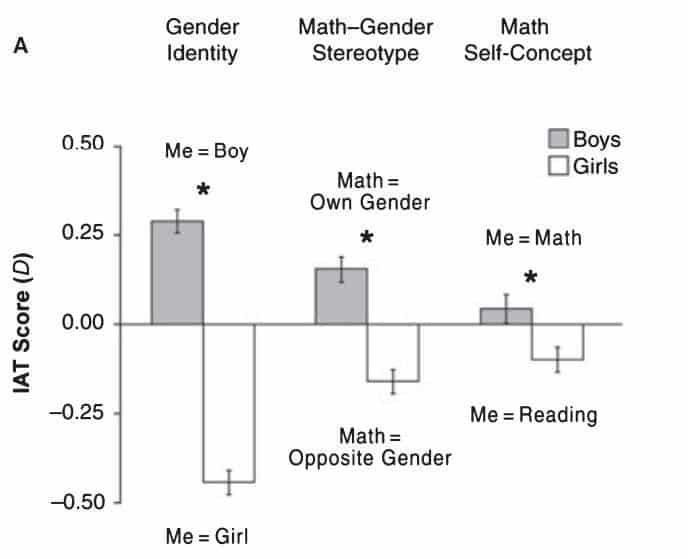 What’s important to note that both boys and girls performed more or less the same, proving that it was easier for both gender to identify “math” to “boys” as opposed to “math” and “girls”. What’s maybe even more important to note is that researchers have concluded that this effect was noticeable starting from an early age as the 1st or 2nd grade, but it’s probably far more earlier. This suggests that the stereotype is not simply a reflection of actual performance but comes from socialization process that starts very early.