2,500 year-old Mayan chocolate suggests it was used a as condiment, not just as a beverage

by Tibi Puiu
in Discoveries, Other
Reading Time: 2 mins read
A A
Share on FacebookShare on TwitterSubmit to Reddit 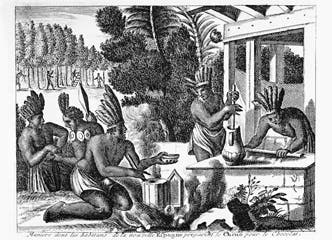 Anthropologists believe cacao beans and pods were mainly used in pre-Hispanic cultures as a beverage, a practice which can be traced traced as far as some 3,500 years ago . The resulting beverage would have been reserved for the Mayan elite. Now, a recent archeological find shows  traces of 2,500-year-old chocolate on a plate in Mexico’s Yucatán peninsula — suggesting it may have also been used as a spice or a condiment.

The discovery was made by Mexico’s National Institute of Anthropology and History and offers a broader picture of how chocolate was used in ancient Mexico.

“This is the first time it has been found on a plate used for serving food,” archaeologist Tomas Gallareta said. “It is unlikely that it was ground there (on the plate), because for that they probably used metates (grinding stones).”

Subsequent tests of the samples brought in for analysis at the lab revealed a “ratio of theobromine and caffeine compounds that provide a strong indicator of cacao usage,” according to a statement by the university.

“These are certainly interesting results,” John S. Henderson, a Cornell University professor of Anthropology and one of the foremost experts on ancient chocolate, said in an email Thursday.

“[…]the presence of cacao residues on plates is even more interesting … the important thing is that it was on flat serving vessels and so presented or served in some other way than as a beverage,” Henderson continued.

Although the present cacao traces date back from 500 BC, this isn’t the oldest evidence attesting chocolate use in the Yucatan.  Beverage vessels found in excavations of Gulf coast sites of the Olmec culture, to the west of the Yucatan, and other sites in Chiapas, to the south, have yielded traces around 1,000 years older.