by Mihai Andrei
in Anthropology, Climate, Feature Post
A A

In almost every belief there’s an apocalypse, hanging above the believers’ head like the sword of Damocles. But as far as we know so far, such an apocalypse is yet to come; this is where Mike Moseley, a distinguished professor of anthropology at the University of Florida steps in, claiming that actually, the earliest American civilization found its demise due to what they probably believed was the end of the world. 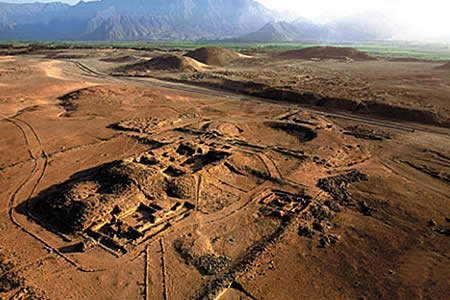 We aren’t talking about any bizarre meteorological phenomena, we’re just talking about something that’s not very uncommon, but it’s very powerful: El niño and earthquakes. First came the earthquakes, then the torrential rains, resulting in massive floods, facilitated by the quakes. At least that’s what the anthropologists say that caused the rapid demise of a civilization that fluorished for more than 3500 years.

“This maritime farming community had been successful for over 2,000 years, they had no incentive to change, and then all of a sudden, ‘boom,’” said Mike Moseley, a distinguished professor of anthropology at the University of Florida. “They just got the props knocked out from under them.”

Unlike in other cases, we know quite a lot about them. They were located along the Peruvian coast, by the Supe Valley and they didn’t use pottery or weave cloth, but they fluorished in pretty difficult conditions, and in the arid plains near the estuaries they thrived by fishing with nets, growing cotton and vegetables, and they also irrigated orchards. But the most impressive thing they did was build extremely massve, elaborate, stone pyramid temples, more than 2000 years before the more famous temples of the Maya or other great achievements.

The biggest pyramid was more than 550 feet long, just under 500 feet wide; the steps led up to almost 100 feet in height. Scientists estimate that the among the earthquakes that hit them, there was one of a magnitude of 8 or higher, collapsing most of their constructions and even worse, ending this fluorishing civilization. When you draw the line, one can say it was about progress; the withering civilization was replaced by modern ones, that relied more on arts, pottery and weaving. Still, it has to be said that there is a lot to be learned from their story, as most of the world’s cities are built in environmentally vulnerable areas. Scientists are especially afraid of El Niño events, which can become more and more common due to climate change.