by Mihai Andrei
in Physics, Research
Reading Time: 2 mins read
A A 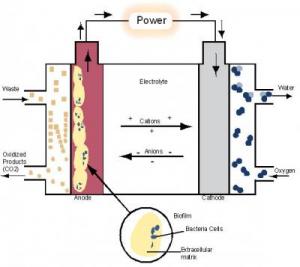 Researchers are searching everyday for options which could bring an ending to the energy issue or at least delay it for an undefinite time and bacteria researching has developed a lot so it would only seem sensible to bring those two together. The point would be well to obtain a bacteria which generates electricity.

Researchers at the Biodesign Institute showed that this option is viable in a study featured in the journal Biotechnology and Bioengineering; lead author Andrew Kato Marcus and colleagues Cesar Torres and Bruce Rittmann have gained critical insights that may lead to commercialization of a promising microbial fuel cell (MFC) technology.

“We can use any kind of waste, such as sewage or pig manure, and the microbial fuel cell will generate electrical energy,” said Marcus, a Civil and Environmental Engineering graduate student and a member of the institute’s Center for Environmental Biotechnology. Unlike conventional fuel cells that rely on hydrogen gas as a fuel source, the microbial fuel cell can handle a variety of water-based organic fuels. “There is a lot of biomass out there that we look at simply as energy stored in the wrong place,” said Bruce Rittmann, director of the center. “We can take this waste, keeping it in its normal liquid form, but allowing the bacteria to convert the energy value to our society’s most useful form, electricity. They get food while we get electricity.”

Bacteria are so diversified and they are so adaptable that scientists can find a bacterium that can handle about any waste in their diet. By linking bacterial metabolism directly with electricity production, the MFC eliminates the extra steps necessary in other fuel cell technologies. They get a very cheap source of energy. There are numerous teams researching these but this seems to be the only team which managed to solve the very hard problem of actually getting the bacteria get the electrons to the anode of the reactor; this type of reactorsr have a pair of battery-like terminals: an anode and cathode electrode. The electrodes are connected by an external circuit and an electrolyte solution to help conduct electricity. The difference in voltage between the anode and cathode, along with the electron flow in the circuit, generate electrical power. To harvest the benefits researchers are using this model to optimize performance and power output.