by Mihai Andrei
in Geology, Research
Reading Time: 4 mins read
A A
Share on FacebookShare on TwitterSubmit to Reddit

The fossil, which still retains impressions of feathers, is 160 million years old, predating the oldest Archaeopterix fossil found by 10 million years. Scientits have named it Aurornis, which means “dawn bird”. 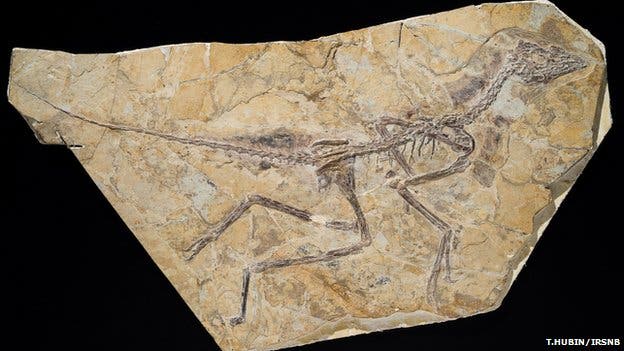 Aurornis enables us not only to better understand the emergence of birds, but also to understand how powerful flight originated. About 50cm tail to beak, the animal has very primitive skeletal features that puts it at the very base of bird evolution. It had claws and a long tail with front and hind legs similar to those of Archaeopteryx, but some features of its bones were more primitive.

Archaeopteryx holds a very prized position in paleontology, some considering it the most significant fossil ever found. The fossil, discovered in Germany in 1861, proved that modern birds evolved from dinosaurs, and was the first fossil to support Darwin’s theory of evolution, which had been published just two years earlier.

But this finding pushes Archaeopteryx off its pedestal.

“It’s an important fossil,” said Gareth Dyke, a senior palaeontologist involved in the study at Southampton University. “Aurornis pushes Archaeopteryx off its perch as the oldest member of the bird lineage.” 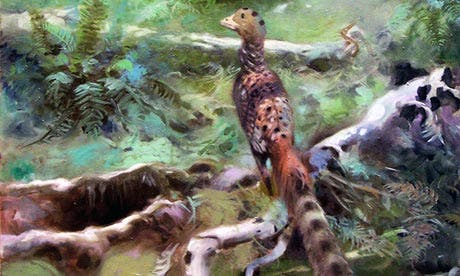 Geologists working at the Yizhou Fossil and Geology Park in north-eastern China explained that the fossil has a very interesting story. It was actually bought from a local fossil dealer, who claimed they had been unearthed in Yaoluguo in western Liaoning, where sedimentary rock was laid down 153m to 165m years ago. It’s not that uncommon for paleontologists to work with dealers (especially in China), but this is a pretty risky business when it comes to gauging the age of the fossils. This usually leads to an influx of fossils to the market, out of which many are fakes, or fake dated.

But this one seems really legit. When Pascal Godefroit and others at the Royal Belgian Institute of Natural Sciences in Brussels revealed the intricate details of the skeleton, they noticed no signs of forgery.

Shaking up the avian group

But the real discussion is about flight and birds. Archaeopteryx could clearly fly – there’s no doubt about that. In the past few years, there trend has been to believe that Archaeopteryx was in fact not a bird. This study places it back to its rightful place.

“This work makes Archaeopteryx a bird again, and given that we have the original specimen here in London, we’re very pleased to have it reinstated,” said Paul Barrett at the Natural History Museum in London. “It makes life simpler. If Archaeopteryx was an early bird, we only have to worry about one origin of flight.”

But with, Aurorinis, the story is quite different.

But it’s pretty hard to draw some conclusions with just one fossil.

“Previous phylogenetic investigations were based on maybe only 200 morphological characteristics. Here, we recognise almost 1,500 characteristics,” explained Dr Godefroit. “So it’s a much bigger and more robust analysis, and according to this new investigation Archaeopteryx is again considered an ancestor of birds and the new creature we describe is also a basal bird; and in fact it is even more primitive than Archaeopteryx,” he explained.

But this finding shakes the avian tree even more – it also re-shuffles the Troodontidae, a family of bird-like dinosaurs. Dr Godefroit and colleagues now consider these to be a sister group of the avialans.

“What we’re arguing over here is actually very small, esoteric features of the anatomy,” commented Dr Paul Barrett from the Natural History Museum, London, UK. “We’re looking at a nexus of animals around bird origins – birds themselves and a bunch of dinosaurs that are almost, but not quite, birds. “There is a really grey, wobbly line between the two. Just one or two changes across a huge body of data can make the difference between an animal being on one side of this bird-dinosaur divide or the other.