Scientists discover ‘world’s first bird’, and compare it to another 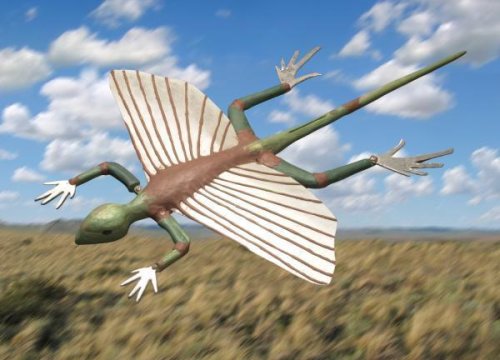 Archaeopteryx has been the subject of many controversies, but it is now widely considered as the world’s oldest bird; however, reptiles were flying for 50 million years when it appeared, even before the world was roamed by dinosaurs. Now, paleontologists have unveiled an extraordinary prehistoric ‘flying’ reptile which lived 235 million years ago.It’s called kuehneosaurs and it was first unearthed in the Britain by Archaeologists in the 1950s but until now nobody has studied their ability to fly or glide; a team of scientists from the University of Bristol, England conducted a study which led to surprising conclusions. These early flyers used extraordinary extensions of their ribs which used friction with air to form large gliding surfaces on the side of the body. They were up to 70 cm in size, and it was first assumed that they were able to fly, so scientists didn’t even think about studying their ability to glide. The team built lifesized models of the two genera.

They are Kuehneosuchus, which was a glider and had elongate wings and Kuehneosaurus which had much shorter wings which were used in a way similar to parachuting. Scientists are studying the possibility that these two were in fact the male and female of the same species, because in other aspects there is little or no difference. Koen Stein, who worked at this project:

“We didn’t think kuehneosaurs would have been very efficient in the air, but all the work up to now had been speculation, so we decided to build models and test them in the wind tunnel in the Department of Aerospace Engineering at Bristol.
“Surprisingly, we found that Kuehneosuchus was aerodynamically very stable. Jumping from a five-metre tree, it could easily have crossed nine metres distance before landing on the ground. The other form, Kuehneosaurus, was more of a parachutist than a glider.”