by Mihai Andrei
in Biology, Geology, Research
A A 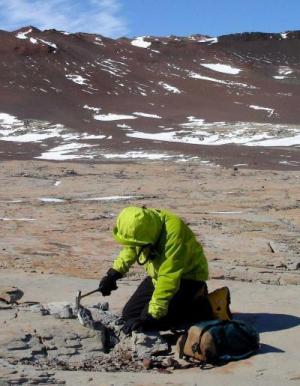 For the first time, scientists have found fossilized burrows of tetrapods (four legged vertebrates) in Antarctica dating from the Early Triassic epoch, about 245 million years ago. They’ve been conducted research there since early 2006, and it’s the first time they’ve actually found something of this calibre.

The fossils are created in a relatively simple process: fine sand from an overflowing river pours into the animals’ burrows and hardens into casts. The good thing is the fact that there are some quite big burrows (14 inches long, 6 inches wide and 3 inches deep), but no animal remains can be found there.

According to Christian Sidor, an assistant professor of biology at University of Washington and curator of vertebrate paleontology at the Burke Museum of Natural History and Culture at the UW, there are some scratch marks from the animals’ initial excavation.

“We have documented that tetrapods were burrowing, making dens in Antarctica, back in the Triassic,” Sidor said. “There are lots of good reasons for burrowing at high latitudes, not the least of which is protection from the elements.”