See CRISPR in action in a new video

With amazing resolution down to the nanometer.

by Elena Motivans
in Biology, News, Videos
Reading Time: 2 mins read
A A
Share on FacebookShare on TwitterSubmit to Reddit

CRISPR is a powerful gene editing tool that can accurately add in or take out bits of DNA. There’s a lot of buzz about it because it is cheap, easy, and precise. There is also a lot of mystery surrounding CRISPR, perhaps because of its more controversial uses, such as plans of resurrecting the woolly mammoth or editing human embryos, and more sci-fi uses, like eliminating malaria and other diseases from mosquitoes and growing human organs in pigs. However, right now, it’s causing its biggest revolution in the lab, where scientists are now able to manipulate and control any gene easily. 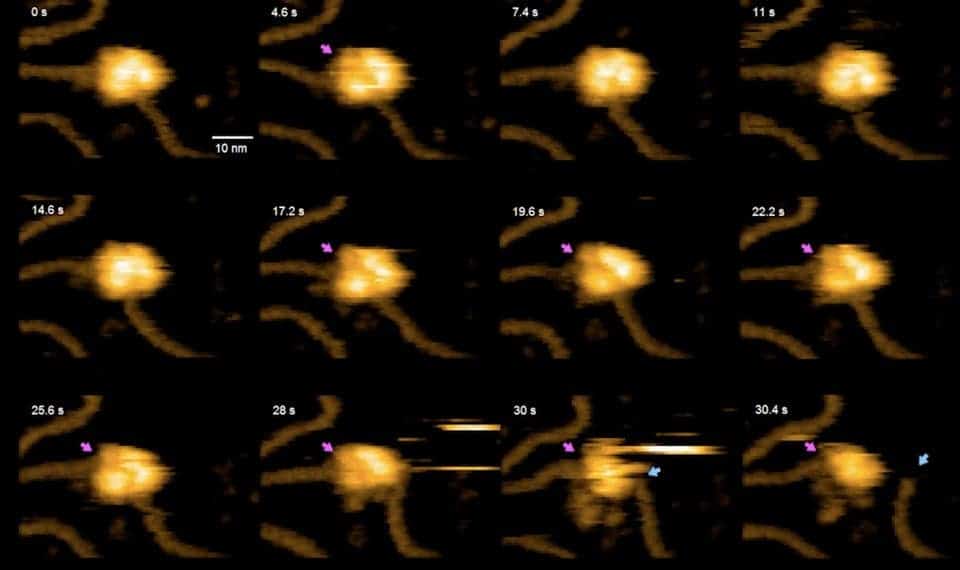 CRISPR is an acronym for Clustered Regularly Interspaced Short Palindromic Repeats. These are actually just sequences which repeat at regular intervals with spaces in-between them. Bacteria use these spaces to keep a genetic memory of viruses that have invaded it in the past. If that virus dares to show its face again, the system will recognize it and destroy it. The sequences can’t detect and destroy viruses by themselves, but they have two helpers: the enzyme Cas9 and guide RNA.

Researchers from Kanazawa University and the University of Tokyo in Japan have published a new study in Nature Communications in which they visualized CRISPR-Cas9 in action, cleaving a strand of DNA in two. They visualized the process for a more detailed look at what CRISPR-Cas9 actually does. The technique that they used is called high-speed atomic-force microscopy and uses mechanical probes to get good resolution images and videos down to a nanometer. Now, you can watch the CRISPR-Cas9 complex work in real-time and real-space.

Single-molecule movie of DNA search and cleavage by CRISPR-Cas9. pic.twitter.com/3NQxmbvzJF

CRISPR-Cas9 is like a hand with scissors. The guide RNA is the hand that directs the scissors to bits of DNA matching info in the genetic memory, leading it to the target. When found, Cas9 are like scissors that cut the DNA and destroy it. In this video, you can see the molecular scissors at work cleaving the DNA at the end of the clip. The original sequence can be destroyed or a new sequence can be patched into the gap.

It is pretty amazing that we can see exactly what happens when CRISPR-Cas9 is at work.