Warning: Don't try this at home!

Warning: Don’t try this at home! 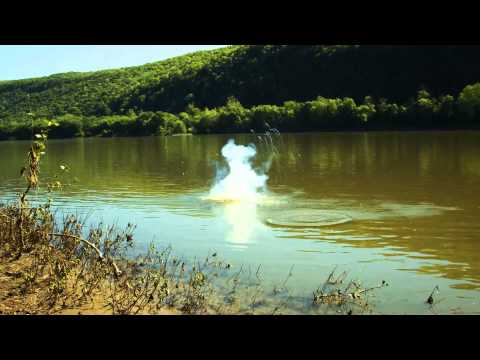 One wiseguy Youtuber called EatsTooMuchJam skipped a pound of sodium across a river for science. What happened next was totally predictable, but still amazing to watch like any spontaneous explosion. It was also a very expensive science experiment, too. One pound of 99.8% sodium metal ingots sells for $180 over at Amazon.

The reaction between sodium and water is one the most spectacular in chemistry. Being a highly reactive metal, when sodium comes into contact with water, it displaces hydrogen gas per the following:

The reaction produces jets of hydrogen gas below the water, which propels the sodium. The reaction also releases a lot of heat, and as the sodium and solution warm up, it goes faster. If sodium gets hot enough, the hydrogen jet can ignite and burn, rising the temperature of the reaction even further. This raises the reaction time so quickly that an explosion may occur — which is exactly what happened here.