Deadly tornadoes are rampaging the United States, killing an estimated number of 193 people in five states already, and showing people that this is just a taste of what’s to come. The majority of deaths (128) has been in Alabama, and authorities seem pretty unprepared to takek care of the situation. 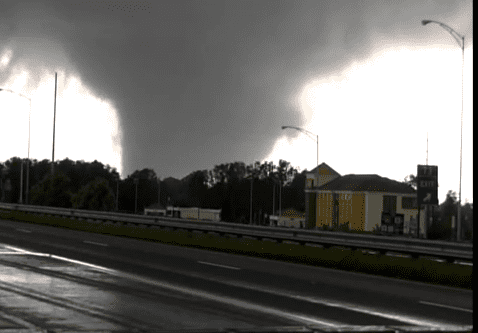 “There is some massive devastation out there. We have some people that are hurting. We’ll be out in just a few minutes of all Northern Alabama looking at this,” he said.

Officials states that they expect the death toll to rise, especially as the tornadoes have just begone ravaging the country.

“It’s been a devastating blow to the people of this community,” said Tuscaloosa Mayor Walt Maddox this morning. “We need men, materials and equipment. Our system is overwhelmed. The tornado took out a major nerve center of city, our environmental services department which is how we pick up debris, trash. It’s gone and the fleet that we have, the vehicles are gone,” Maddox said.

At least a dozen cities remain unpassable, and there have been reports of destroyed fire stations and communication plants.

“We have way over 100 injuries throughout the city of Tuscaloosa,” Maddox said Wednesday. “We have hundreds of homes and businesses destroyed and hundreds more damaged.”

The National Guard has already been dispatched and it’s on its way to salvage what can be salvaged from the tornadoes, but in the state of Alabama at least, the damage has already been done; but that’s not to say help is not much needed !

The tornado destruction is heading from Alabama to New York, where dozens of cities are already unrecognizable due to all the damage. The Browns Ferry nuclear power plant about 30 miles west of Huntsville lost offsite power but there is no risk of the situation escalating further, while in Huntsville, meteorologists found themselves in the path of severe tornadoes and had to take shelter from the devastating storms:

“We have to take shelter just like the rest of the people,” said meteorologist Chelly Amin, who wasn’t at the office at the time but spoke with colleagues about the situation.

You can follow a live update of the disaster at the CNN blog and we will keep you posted with the situation.