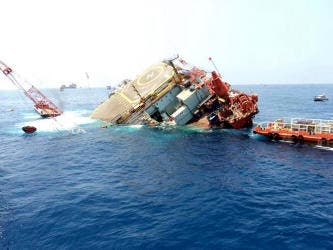 Life on an oil platform is tough; it’s hard living on a piece of metal in the middle of the ocean, but you know that no matter what, safety comes first. So one can only imagine how many safety and probably structural precautions the people at Floatel Jupiter ignore, because that platform sunk like a rock.

The Mexican state owned oil giants that runs it, Pemex, reported no injuries, thankfully, but they did lose 2,075 barrels of diesel and 82 barrels of kerosene.

The trouble began when the water pumping system just failed and the platform support was flooded.

“Bilge pumps from the installation were insufficient to counteract the ingress of water so we proceeded to complete evacuation at 13:30,” said a platform operator.

But hey, the people over at Pemex are not worried that this happened and could happen again, they’re worried about getting back their equipment and as much oil as possible – which is kind of what you’d expect from a major oil company. An investigation was also launched to find out what was the cause of this devastating malfunction, which has been labeled as an accident.