3000 dolphins die, wash up on the coast of Peru as a result of oil companies activitiy

In the past 3 months, over 3000 dead dolphins have been washed ashore on the coasts of Peru, and this worrying trend continues to grow. So far, the average is about 30 per day, but a significant growth has been reported in the past few days. 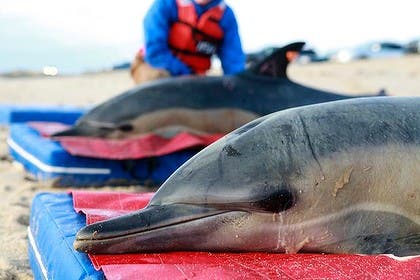 While dead dolphins washing up are not entirely uncommon, the magnitude of this event is definitely not natural. According to many biologists, including Peruvian biologist Carlos Yaipen of the Scientific Organization for Conservation of Aquatic Animals, oil companies are to blame in this instance. They believe that acoustic sensing (sonar) is to blame.

“The oil companies use different frequencies of acoustic waves and the effects produced by these bubbles are not plainly visible, but they generate effects later in the animals. That can cause death by acoustic impact, not only in dolphins, but also in marine seals and whales.”

Using this technique is not that uncommon; when on land, oil companies use dynamite or massive trucks to generate seismic waves, which offer valuable information about the underground and the location of a possible reservoir. However, when on sea, these techniques can’t be used, so they use other techniques, including sonars; certain frequencies and intensities can be extremely harmful to the local environment.

In 2003, scientists from the Zoological Society of London proved that underwater sonar can lead to the formation of microscopic bubbles of nitrogen in the bloodstream and vital organs of aquatic mammals, afflicting the animals with a lethal condition commonly known as the Bends. Furthermore, low-range acoustic sensors cause disorientation and even internal bleeding in aquatic mammals.

It is still unclear what company is prospecting in the area as this kind of data isn’t public (of course), but according to Offshore Magazine, a trade publication of petroleum news, at least one entity, Houston-based oil company BPZ Energy, has been actively surveying the seabed along the coast of Peru since the beginning of the year.