Skydiver nearly struck by meteor, catches it all on film

Anders Helstrup and several other members of Oslo Parachute Club were expecting a good time, and no major events when they went skydiving in Hedmark, Norway. They most certainly weren’t expecting a meteor swooping by past them.

This is the first time in history that a meteorite has been filmed in the air after its light goes out. Thankfully, no one was hurt, even though it was a little too close for comfort. Also, Helstrup had two cameras fixed to his helmet, which allowed him to see the meteor on film, even though he didn’t realize it at the moment.

“I got the feeling that there was something, but I didn’t register what was happening,” Helstrup explained to NRK.no.

Immediately after landing, he watched the film and saw the culprit: a meteor. The adventurers that they are, he and his friends organized a search party, but were unable to find the meteorite. Eventually, he contacted the Natural History Museum in Oslo.

“The film caused a sensation in the meteorite community. They seemed convinced that this was a meteorite, perhaps I was the one who was the most sceptical.” 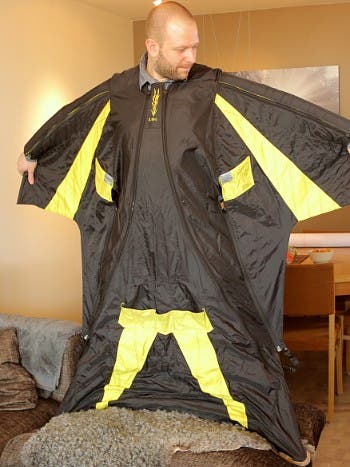 Suddenly, more people got involved, and some triangulated the possible positions of the meteorite and started looking for it. The area has now been limited to 100 x 100 meters, but that’s big enough, especially considering that people don’t exactly know how the meteor looks like.