Hunt for meteorite is on! Ontario, here we come

by Mihai Andrei
in Space, Studies
Reading Time: 2 mins read
A A
Share on FacebookShare on TwitterSubmit to Reddit 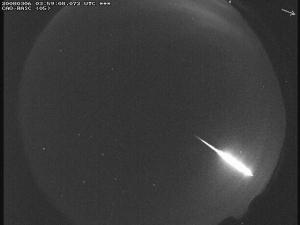 Astronomers from the University of Western Ontario in London, Ontario have spotted (with the aid of cameras, of course) a meteor falling to Earth; this is quite a rare occasion and scientists from many fields are eagerly awaiting the recovery of the meteorite and the start of the studies.

They spotted a giant fireball Wednesday evening (March 5) at 10:59 p.m. EST with the help of all-sky cameras in Southern Ontario that scan and search for such things, and they also received many emails from people who had actually seen the light. Associate Professor Peter Brown has dedicated a big part of his life to studying meteors and meteorites.

Along with Wayne Edwards, a post doctorate student, he hopes to convince the locals and the local authorities to help them find part of the object, if not all the parts.

“Most meteoroids burn up by the time they hit an altitude of 60 or 70 kilometres from Earth,” says Edwards. “We tracked this one to an altitude of about 24 kilometres so we are pretty sure there are at least one, and possibly many meteorites, that made it to the ground.”

Although these rocks probably weigh about a kilogram (or at most 2) they hold valuable information for physicists, chemists, biologists, astronomers and many more.

“We would love to find a recovered meteorite on this one, because we have the video and we have the data and by putting that together with the meteorite, there is a lot to be learned.”

Here’s a very short movie of what the scientists witnessed.