Unique 4.6-billion-year-old meteorite is a remnant of the early solar system

It's older than Earth itself!

by Tibi Puiu
in Geology, News, Space
Reading Time: 4 mins read
A A

A never-before-seen space rock — older than Earth itself! — stands out among the 40,000 meteorites researchers have recovered so far. Scientists claim this is the oldest igneous meteorite found thus far and by studying it they hope to learn more about how the solar system formed and evolved.

About 4.6 billion years ago, a massive cloud of gas and dust collapsed under its own gravity, forming a spinning disk with a proto-sun at its center. Under the influence of gravity, material accreted into small chunks that got larger and larger, forming planetesimals. Many such objects likely broke back apart as they collided with each other, but others would have coalesced — eventually becoming planets and moons. However, the journey to building a planet was quite messy. One study published in Nature concluded that Earth lost nearly 40 percent of its mass as vapor during collisional growth.

The weird meteorite described by Carl Agee, the Director of the University of New Mexico’s Institute of Meteoritics, and colleagues provides chemical evidence that silica-rich crustal rocks were forming on planetesimals at least 10 million years before the assembly of the terrestrial planets.

At first, however, the space rock looked pretty unassuming. The researchers initially thought that the rock — called Northwest Africa 11119, as it was discovered in the sand dunes of Mauritania — was terrestrial in origin due to its light appearance and silica-rich content.

The rock, which was originally found by a nomad and later sourced by Agee via a meteorite dealer, was handed over to graduate student and lead author Poorna Srinivasan to study its mineralogy. Using an electron microprobe and a CT (computed tomography), Srinivasan started noticing unusual details in NWA 11119 and concluded it is extraterrestrial in origin, judging from its oxygen isotopes. What’s more, the silica-rich achondrite meteorite contains information involving the range of volcanic rock compositions (their ‘recipes’) within the first 3.5 million years of solar system creation.

“The age of this meteorite is the oldest, igneous meteorite ever recorded,” Agee said in a statement. “Not only is this just an extremely unusual rock type, it’s telling us that not all asteroids look the same. Some of them look almost like the crust of the Earth because they’re so light colored and full of SiO2. These not only exist, but it occurred during one of the very first volcanic events to take place in the solar system.”

According to Srinivasan, the mineralogy of the rock is unlike anything the researchers have worked on before. One of its most striking characteristics is that large silica crystals of tridymite — which are similar to quartz — comprise about 30 percent of the total meteorite. This kind of composition is unheard of in meteorites — which typically have ‘basaltic’ compositions with much lower abundances of silica — and can only be found in certain volcanic rocks from Earth. 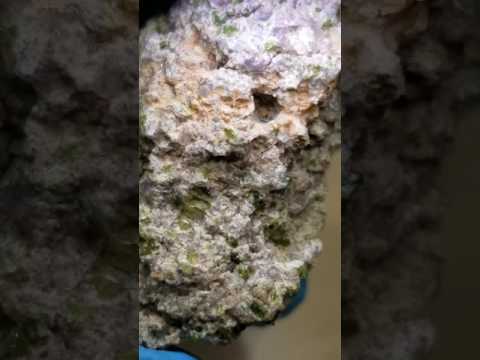 But where exactly NWA 11119 formed is still a mystery.

“Based on oxygen isotopes, we know it’s from an extraterrestrial source somewhere in the solar system, but we can’t actually pinpoint it to a known body that has been viewed with a telescope,” said Srinivasan. “However, through the measured isotopic values, we were able to possibly link it to two other unusual meteorites (Northwest Africa 7235 and Almahata Sitta) suggesting that they all are from the same parent body – perhaps a large, geologically complex body that formed in the early solar system.”

It’s possible that this larger parent body was torn to pieces through the collision with some other asteroid or planetesimal, ejecting fragments that would eventually hit Earth at a yet unknown time in the past.

“The meteorite studied is unlike any other known meteorite,” says co-author and ASU School of Earth and Space Exploration graduate student Daniel Dunlap. “It has the highest abundance of silica and the most ancient age (4.565 billion years old) of any known igneous meteorite. Meteorites like this were the precursors to planet formation and represent a critical step in the evolution of rocky bodies in our solar system.”

The findings published in the journal Nature Communications are important because they help scientists piece together how the building blocks of planets formed in the early solar system. Specifically, this “missing part of the puzzle that we’ve now found that tells us these igneous processes act like little blast furnaces that are melting rock and processing all of the solar system solids,” Agee said.

“Ultimately, this is how planets are forged,” he added.