Originality is a scarce commodity on the web.

No matter what you’re posting on Instagram, it’s probably already been done before. A lot. 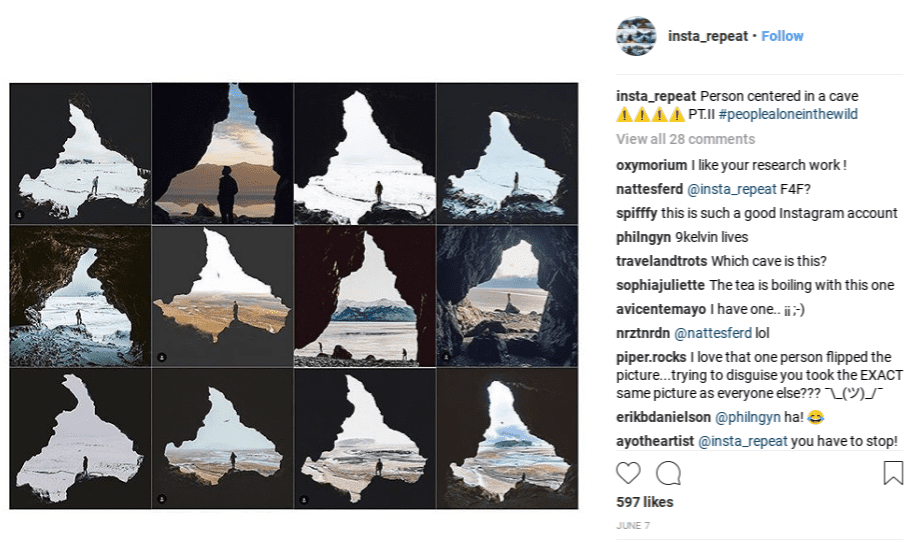 Your gorgeous and delicious lunch. You and your friends having fun. Even your breathtaking mountaintop photo — it’s all been posted and reposted to social media, and there’s an account to prove it.

It’s called @insta_repeat, and it’s the brainchild of a 27-year-old artist and filmmaker from Anchorage, Alaska, who chose to remain anonymous. Speaking to Photography Shelter, she discussed what the reasoning behind the project is:

“There is a lot of mimicry everywhere in media, not just on Instagram. A purpose of Insta_Repeat is to critique originality in media creation through the lens (pun intended) of this one ‘genre’ of Instagram photography accounts.”

It’s not just that these photos are repetitive, she says, but they perfectly sum up a type of social media posts — the “live authentic” type.

“What makes these images unique targets is the specific genre these accounts I feature fit within. It’s this genre of adventurous and creative living, tagged with phrases like “liveauthentic” and “exploretocreate” that seems so ironic and thus an interesting target to me,” the woman adds.

So, from standing in front of cave exits, to impressive mountain photos, to photos of people taking photos — she captures it all. It’s still a pretty new account, but the message is clear: originality is a scarce commodity on social media.

It’s quite likely that people are trying to emulate the experience of popular personalities and Instagramers — so-called influencers with thousands and thousands of followers. Whether people are doing it simply for the ‘gram’ or they simply lack creativity,

However, there is still some value in repetition, the profile creator, who works as an artist and filmmaker, explains. It’s just not what you’d expect from people enjoying their vacations and weekends.

“I also think there’s an incredible amount of value in emulation both when someone is learning and continuing their craft,” she says. “Improving upon and building upon what has been done…is an important part the evolution of art.”

So, what about you? Do you follow your own path, or do you try to emulate what’s popular on the web? Leave your opinion in the comment section — creativity is encouraged.

Feet in front of Horseshoe Bend ?