by Tibi Puiu
in Green Living, Other, World Problems
ADVERTISEMENT

The Andean cat (Leopardus jacobita) is an extraordinary elusive creature, being relatively small, well camuflaged and incredibly hard to find dwelling in a habitat usually at 3,000 meters in altitude. Actually, up to the late 1990s the snow leopard-like cat was known to scientists only through a few pictures sporadically taken by locals when such a rare opportunity made itself possible.

Researchers have now recently made a significant find when such felines were found in the Patagonian steppe at elevations as low as 650 meters. This might help shed more insight on the Andean cat and help conservation efforts of thee species, which is classed as endangered by the IUCN Red List.

“These confirmed records show the lowest elevations ever reported for the Andean cat,” said Wildlife Conservation Society (WCS) conservationist Andres Novaro, lead author of the study appearing in CATNews. “According to genetic studies underway led by Daniel Cossios, this new population appears to represent an evolutionary lineage distinct from the highland population.”

The Andean cat faces a number of threat which might lead it to extinction, be it deforestation, oil drilling, climate change, road building, getting killed by locals (they consider it a pest, and some hunt it for it’s supernatural power it allegedly confers when eaten). The Andean cat existence is heavily linked to its pray the mountain vizcacha (Lagidium viscacia) a rodent that looks like a rabbit, but is related to the chinchilla, which is also scarce to find. 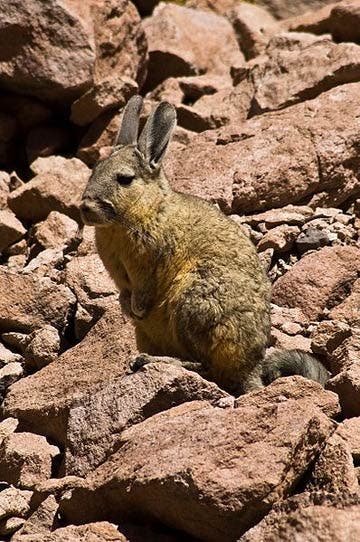 Surprisingly, the Patagonia steppe is actually home to four wild cat species: Geoffroy’s cat (Leopardus geoffroyi), pampas cat (Leopardus pajeros), the jaguarundi (Puma yagouaroundi), and the Andean cat, which is the most endangered.

“Discovering a new population of Andean cats is an important finding for this elusive and rare species,” said Mariana Varese, acting director of WCS’s Latin America and Caribbean Program. “Determining the range of the Andean cat in the Patagonian steppe will provide conservationists with a foundation for later conservation plans.”

Of the 36 species of wild cats living in the world, more than half, 22 that is, are classed as “small cats” (domestic cat-sized) and remain little known by the public and little aided by much of the conservation community.