Germany removes University Fees – what we Should Learn from That

All German Universities will be free of charge as of this year. The last German area to remove fees, Lower Saxony, has officially done so, in what promises to be a historic moment for German (and European) education.

by Mihai Andrei
in News, Other, Science

All German Universities will be free of charge as of this year. The last German area to remove fees, Lower Saxony, has officially done so, in what promises to be a historic moment for German (and European) education.

No tuition fees in Germany

Education in most of Europe is already very different from what it is in the US, Canada, or Australia. In several countries from the Old Continent (most notably Scandinavian countries – Sweden, Norway and Denmark) education has been free for several years, and other countries are starting to follow suite. Germany is the first (in hopefully a long list of countries) to completely remove university tuition fees.

“Tuition fees are socially unjust,” said Dorothee Stapelfeldt, senator for science in Hamburg, which scrapped charges in 2012. “They particularly discourage young people who do not have a traditional academic family background from taking up studies. It is a core task of politics to ensure that young women and men can study with a high quality standard free of charge in Germany.”

Indeed, the general trend seems to be to reduce or eliminate tuition fees for higher education. The notable exception here is Great Britain.  With some exceptions (like for example Welsh Universities being free for Welsh people), the UK tuition fees are starting to rival those in the US. But it seems more logical to treat higher education like an investment in the country’s future, and not like a private company. It seems logical for the government to support higher education from taxes, thus investing in its future.

The alternative, American model has had some success in various stages, but now, the results seem catastrophic – the US has over $1 trillion in student debt, and the number keeps growing, something which accentuates the country’s economical crisis. So, the question which seems to emerge is…

Why do Universities have tuition fees in the first place? 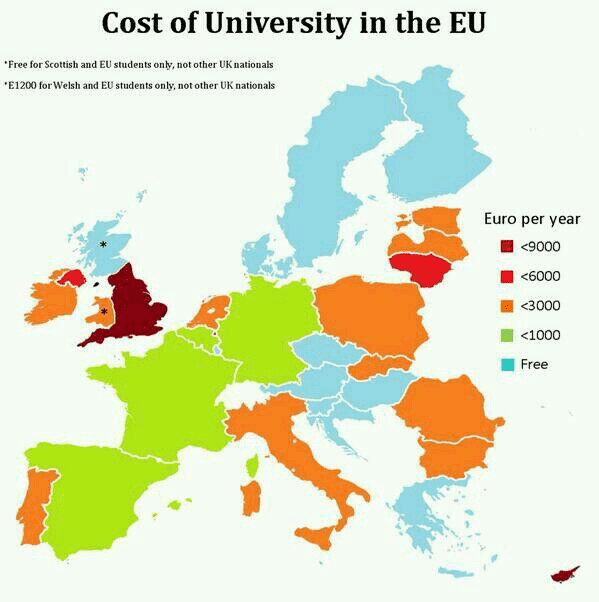 Let’s go back to Germany – why did Germany Universities introduce tuition fees? The answer is simple, yet unpleasant: because politicians wanted to. Self-proclaimed “modernisers” advocated for their introduction ever since the reunification of Germany. Cultural differences between east and west initially hindered this plan, but in 2005, a court decided that Universities have the right to introduce fees, as long as they are “moderate” and coupled with “the potential for small loans”.

Seven out of 10 states in west Germany introduced fees in 2006 or 2007, and loan companies were lured by the possibility of a new market – student loans in Germany. But the trend didn’t last long, as the German government understood that they have more to profit by keeping higher education free. Now, as of this year, education will be free in Germany, and I couldn’t be happier to report that.

A big part of this decision was the popular movement. In Hesse, for instance, students protested en masse, a citizens’ initiative collected 70,000 signatures, and the ruling Christian Democratic Union party, fighting for re-election in 2008, reversed course in order to retain power. You could argue that politics played a key role here – namely politicians hunting students’ votes; you might be right. The conservative prime minister of Bavaria, threatened with a fee referendum, practically forced his liberal coalition partner into abolishing fees. But the end result is positive, and it’s a clear statement. It’s also an interesting movement from a different perspective: many students from poorer countries in the EU (such as Romania, Bulgaria, Hungary etc) seek better higher education, taking advantage of the EU free movement. However, the expensive lifestyle of Norway or Denmark was often prohibitive. The lesser costs of living in Germany, combined with a bigger economic and industrial sector will almost certainly lure students from abroad, eager to learn and find jobs in Europe’s economical powerhouse. This way, Germany also ensures high competition and an influx of talented young minds – kind of like a brain drain in reverse.

The other end of the spectrum: Great Britain

The situation in the UK could hardly be any more different. Students too protested (at a rarely seen scale) in the UK; there was also a lot of political pressure applied on the government – and yet not only did tuition fees not drop, but they continued to increase. Why is it that a country with such a rich history in education (probably the richest) is so adamant about keeping education expensive?

It’s hard to pinpoint just one cause to this difference; one of the main problems lies in the big disparity between the Universities – sure, England has two of the oldest and most prestigious Universities in the world (Oxford and Cambridge), but there is a big gap between those and the other ones. Not in terms of education level – there are several other universities which can compete with Oxford and Cambridge, but in terms of tradition and social interaction. The UK doesn’t have a university community, they don’t have a developed level of collaboration, not like Germany does.

“England has (after the US) the most highly stratified major university system in the world, the most extravagant and rapidly growing provision of elite private schooling, among the most unequal distribution of opportunity, wealth and income, and some of the lowest levels of social mobility in the developed world, according to the Organisation for Economic Cooperation and Development.”, writes the Times of Higher Education.

Historically, only the rich elite was able to go to higher education. This tradition has carried out for several centuries, with few exceptions. It’s embedded in the people’s minds, and even though many reject that idea now, its imprint can still be felt. Furthermore, both the Labour and the Conservatives have kept education towards the bottom of their priorities, and after the election, the Liberal Democrats infamously betrayed their most prominent manifesto commitment: to eliminate university tuition fees altogether.

The English politicians claim they are realistic – that public financing of education is not, and cannot be sustainable. Yet Scandinavian schools have maintained their higher standards of education easily after this change. The number of applying students has increased, and overall, their results seem to be improving. Meanwhile, America is put in a virtually unsolvable problem of ever rising student loans and economic deficit.

So which camp is right?

As usually, it seems we’ll have to wait a few decades before the results are clear. It seems strange that the two most powerful economies in Europe have such different approaches to education, and yet somehow it seems very fitting. Let time settle which one of these opposite approaches is best. I, for one, know where I’d like to study if I was in that situation