A life in a pond – amazing timelapse video

If you’ve ever looked at a pond and thought “Well, not much really going on here”, you couldn’t have been further from the truth. As this fantastic video created by Daniel Stupin shows, a lot is happening even in apparently still ponds.

The hidden life in pond water from Daniel Stoupin on Vimeo.

If you’re interested in reading more about he creates this kind of video (and microphotography), it’s well worth checking out his blog – lots of great info there.

Ok, so what are we seeing here exactly? 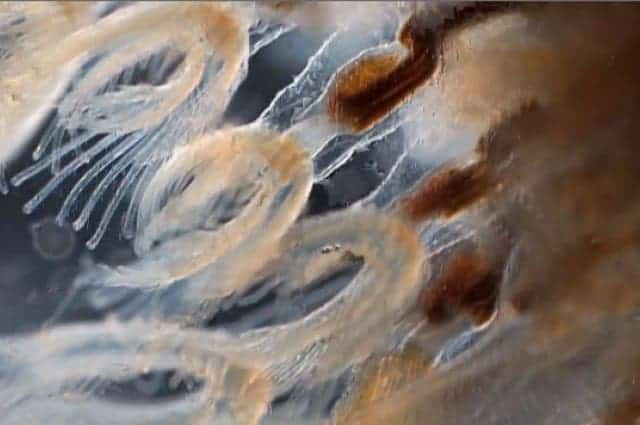 Water fleas are not related to fleas at all – they are small crustaceans virtually ubiquitous in inland aquatic habitats. They have a single eye, reproduce mostly asexually, and can survive extremely harsh conditions and habitats.

Bryozoa are a phylum of aquatic invertebrate animals. Typically about 0.5 millimetres (0.020 in) long, they are filter feeders that sieve food particles out of the water. Almost all live in colonies made up of animals with specialist roles that could not survive on their own. Freshwater species, like the ones in the video, are hermaphrodites.

Mayflies are famous (or infamous?) for their extremely short lives, which are oftentimes present in poetry. They are part of an ancient group of insects termed the Palaeoptera, which also contains dragonflies and damselflies.

Mosquitoes are well known by almost everybody, but not so many people know that out of the 3500 mosquito species, only a few species actually suck on blood. Most of them feed on pollen, and even in the species which do suck blood, it’s only the pregnant females who need the protein to hatch their eggs.

Water mites are a group of mites containing over 5,000 species found in freshwater habitat. They are related to spiders.

Ostracods are a remarkable old group, which have recently provided the oldest example of parental care – 450 million years ago.

Ciliates, which you can also see in this video, are not technically animals, but rather single-celled protazoans, although the larger ones can be longer than some of the smaller animal species Stoupin has captured.

Hydra are radially symmetric predators which look like plants more than animals. A while ago, we told you about a hydra species which apparently doesn’t age, and is the world’s only immortal animal.