An international team of geologists captured a prehistoric portrait of parental care deep in the fossil record. The team led by Leicester geologist Professor David Siveter revealed a ‘sea nursery’ which features a species new to science. 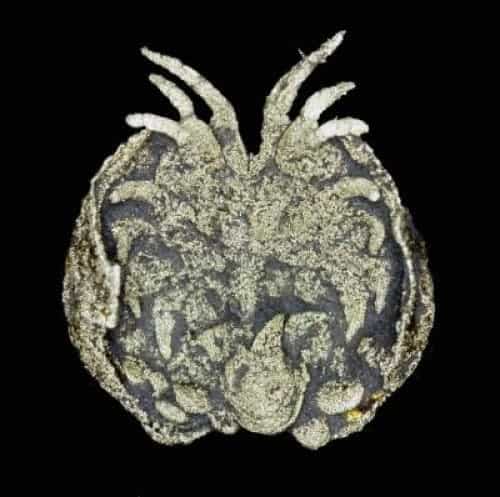 This new species was found with specimens preserved incubating their eggs together with probable hatched individuals. As a result, the team has named the new species Luprisca incuba after Lucina, goddess of childbirth in Roman mythology, alluding to the fact that in these ancient fossils, the mother literally sits on the eggs.

This fossil find not only highlights a remarkable reproductive and brood-care strategy conserved for at least 450 million years, but it is also the oldest confirmed occurrence of ostracods in the fossil record. Ostracods are a class of crustaceans sometimes known as seed shrimp. Some 70,000 species have been identified, and they are still alive today. Ancient ostracods lived alongside trilobites in poorly oxigenated waters

Professor Siveter, Emeritus Professor of Palaeontology at the University of Leicester, said:

“This a very rare and exciting find from the fossil record. Only a handful of examples are known where eggs are fossilized and associated with the parent. This discovery tells us that these ancient tiny marine crustaceans took particular care of their brood in exactly the same way as their living relatives.”

The new fossils are truly spectacular! They measure 2-3 mm in length, and are exceptionally well preserved – conserving not only the shell but also the soft parts of the animal that are almost always lost in the fossil record.