The Greek Navy’s wooden wall — Olympias, last trireme on duty in the world

One ship to carry a huge legacy.

The HS Olympias is a ship of a kind. Build in 1987, the craft conforms to ancient standards and is currently commissioned by the Hellenic Navy of Greece.

The next time grandpa says ‘they don’t do X like they used to’, feel free to reply with ‘but they do boats’. Then you can thank the Hellenic Navy of Greece for your epic comeback because three decades ago they commissioned a breathtaking reconstruction of a trireme — a variant of the galley with three oar-decks, commonly used by Mediterranean civilizations. The ship was built in 1987 in Piraeus. It currently serves with the Navy, and it’s the only ship of its kind in the world on duty.

Work on the vessel began in 1985 based on blueprints made by naval architect John F Coates with help from historian J.S Morrison. Classics teacher Charles Willink was also brought on board to make sure the ship followed ancient standards by picking up clues from history, art, literature, and shipwrecks.

Greece has a long and proud naval tradition. They were a collection of city states that colonized the Mediterranean and united the known world on the decks of their galleys. Their ships explored, fought wars, and traded in goods and science. Faced with invasion from a hugely superior force (yep it was the Persians), Greek oracles said that ‘Zeus, the all-seeing, grants that the wooden wall only shall not fail’ — and through a long and bloody war, it was the only one that didn’t.

The navy is a central cultural pin for Greece — and nothing screams Greek-navy louder than the bronze-headed, painted-eyes trireme. So they set about to create this awesome piece of experimental archaeology at work. 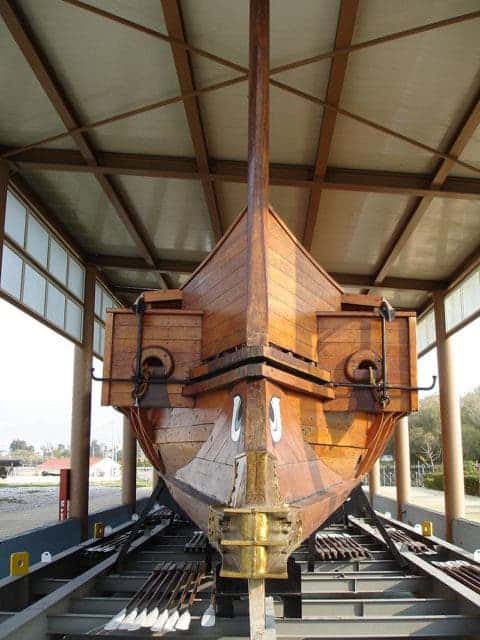 One thing that’s stood the test of time is that triremes are not cheap to build. The project was funded mainly by the Hellenic Navy, with individual donors such as Frank Welsh, a banker and trireme enthusiast, also pitching in. Olympias was built from Virginia Oak, Oregon pine, and an Iroko hull. Her bow is adorned with a hefty, 200 kg bronze ram, copied after one currently held by the Piraeus archaeology museum. This was the main anti-ship weapon of triremes, and in ancient battles was supplemented with the spears and bows carried by her crew.

Some things, unfortunately, could not be perfectly recreated. Triremes were designed to be fast, aggressive attack ships with low displacement, so they were built to be as light as possible. They were also really long, to house a lot of oars. Combined, these factors meant that the ships were particularly susceptible to bending on the waves — like a bow being pulled. To sustain the hull, a hypozomata (bracing rope) was mounted beneath the deck, tying the two ends of the ship (bow and stern) together. It kept the hull from breaking in two without adding weight — win-win. After every trip, the ships were pulled ashore in slides and the hypozomata was re-tightened.

Originally made out of hemp, the hypozomata had to be replaced with steel cables. Unlike the natural fiber ropes which kept a constant pull, the tension in these cables varied as the hull bent on the waves. Protective measures were taken to prevent crew injury in case they snapped.

These results were achieved with an amateur crew of volunteers, not a seasoned crew. Olympias was also considerably overloaded compared to the triremes of old, due to the addition of the steel hypozomata and protective measures. Still, the ship proves that the ancient Greek historians didn’t embellish the capabilities of their triremes. 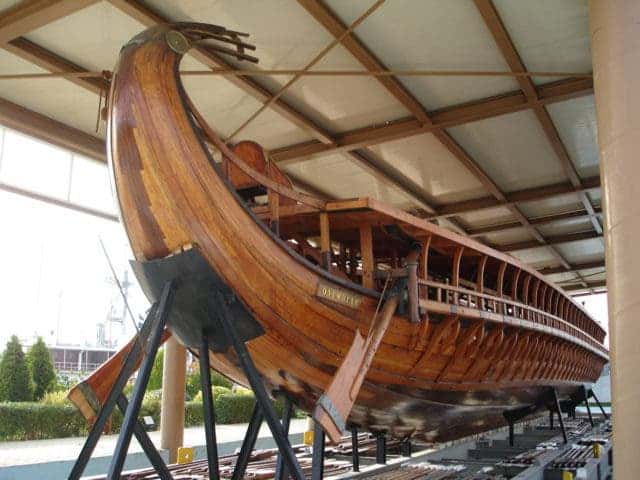 Olympias isn’t just a revived sliver of history — the ship is making history today, too. In 1993, she went to Britan for the celebration of two and a half millennia since the birth of democracy. In 2004, she carried the Olympic Flame from Keratsini to the main port of Piraeus, for the Summer Olympic Games.