There's a digital satellite at your fingertips you can use for free. Let's explore some amazing Google Earth stories!

by Tibi Puiu
in Great Pics, Other

I’ve really loved the Google Earth/Maps technology ever since it’s first rolled out of the Silicon Valley giant many years back. The prospect of having my own digital satellite at my fingertips has been simply mind-blowing, keeping me constantly fascinated by how easy it is for me to reach far away places. Thanks to Google Earth I can now physically see where I need to go, what routes to take or even my cousin’s car in front of her flat in The Village. The possibilities are incredibly wide, as well as the privacy issues…but that’s a story for another time.

Along the years Google Earth hasn’t just been a source of geographical information, but also a valuable tool in spotting remote places and making surprising findings. It helped find a forest packed with undiscovered species, early mammal fossils or even a huge cannabis plantation (sure beats finding crop circles), and much, much more. Bellow, I’ve listed a few truly amazing sights captured with Google Earth, that are either fun, odd or simply mind blowing captured by people with waaay too much time on their hands. 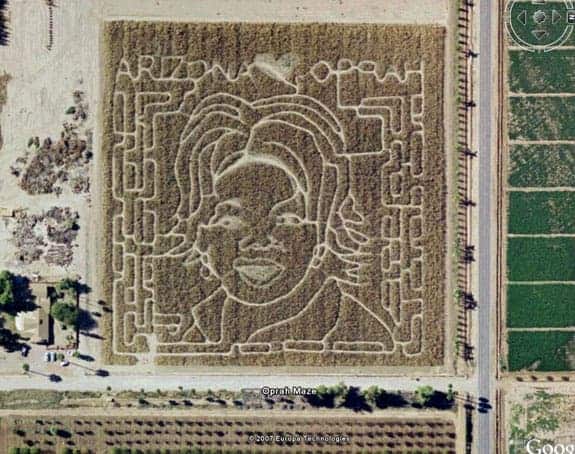 Throughout this list you’ll see a lot of crop circle ‘art,’ but this one can be considered by far one of the weirdest, not because it foretells of the arrival of an alien master race to enslave us all, but rather because it’s a really clear example of how far obsession and cult-like personality can go. Above captioned is the portrait of famous talk-show host Oprah Winfrey carved in a 10-acre crop by an Arizona farmer. Now that’s a fan! [see it on Google Maps | Coordinates: +33° 13′ 33.18″, -111° 35′ 48.32″]

2. The Jet Plane Inside a Parking Lot 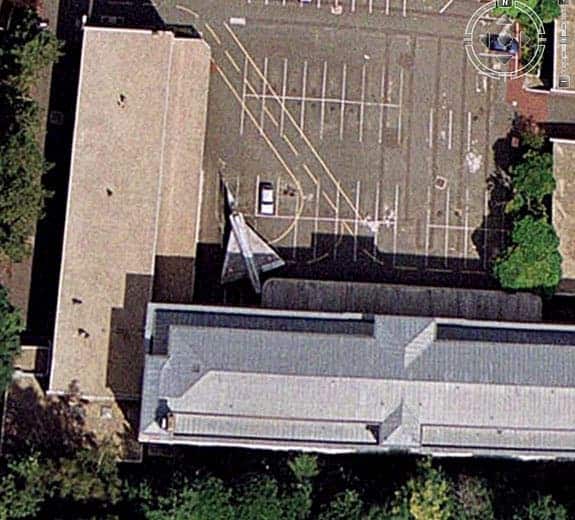 Talk about a smooth ride! We’re used to using jet planes either on air stripes or in the sky, where they belong, not in a residential parking lot in a Parisian suburb as is the case in the above photo. Weird as heck! [see it on Google Maps | Coordinates: 48.825183,2.1985795]

3. A Farmer Who Hates Internet Explorer

4. The Huge Bunny In The Woods 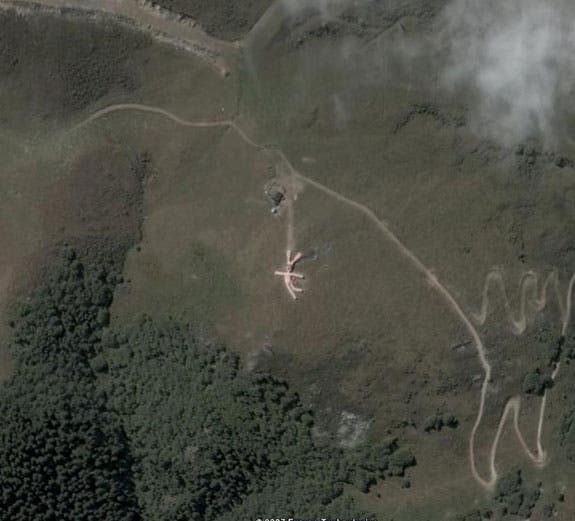 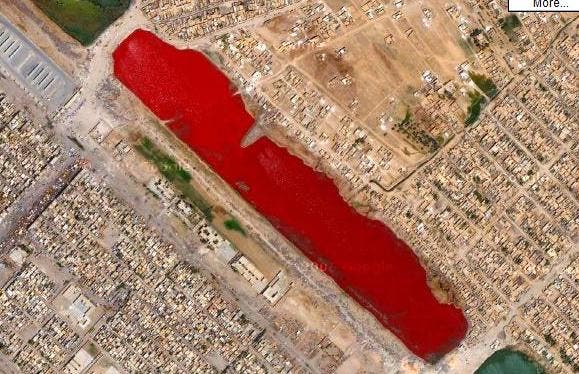 This lake’s colour, located outside of Baghdad, Iraq, has been puzzling people for a lot of time now. Most likely, the reddish colour is a product of pollution or a water treatment facility (which might explain the corrosive colour). Then again, this might as well had been the dumping pool for Saddam’s enemies. (See on Google Maps | Coordinates: 33.39845000,44.48416800 )

6. Building A Brand, Can By Can 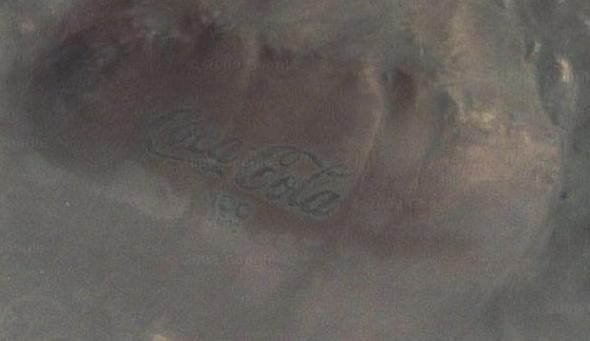 What’s quite possibly the largest logo on Earth (if not, it’s definitely the biggest Coke logo), this is what advertising enthusiasts drool about. This huge Coke ad, 50m tall and 120m wide, was built using 70,000 empty coke bottles in northern Chile near Arica desert. This veritable Coke monument was meant to mark the anniversary of 100 years since the brand’s inception, as one can see in the photo (“100 años” – 100 years). Don’t worry, tree huggers, the Aniro desert is one of the most barren places on Earth. (See on Google Maps | Coordinates: -18° 31′ 45.21″, -70° 15′ 0.07″) 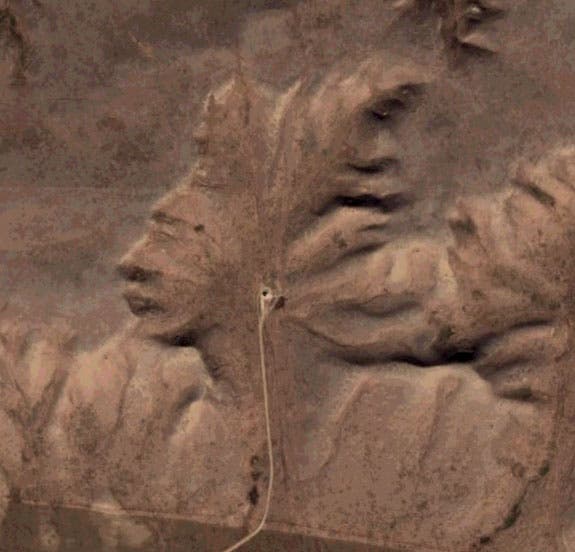 This is one of the most famous Google Earth photos to have circulated on the web. Dubbed the Badlands Guardian, this eroded valley very much resembles the face of a man, and if you take a closer look at the tip of the head, you might notice something like the feather head-piece decoration native Americans used to wear. NOW, if you take an even closer look, you might notice what may seem like a pair of iPod headsets. Pretty funky, right? Unfortunately, it’s just a road with an oil rig at its end. (See on Google Maps | Coordinates: +50° 0′ 37.76″, -110° 7′ 0.86″ ) 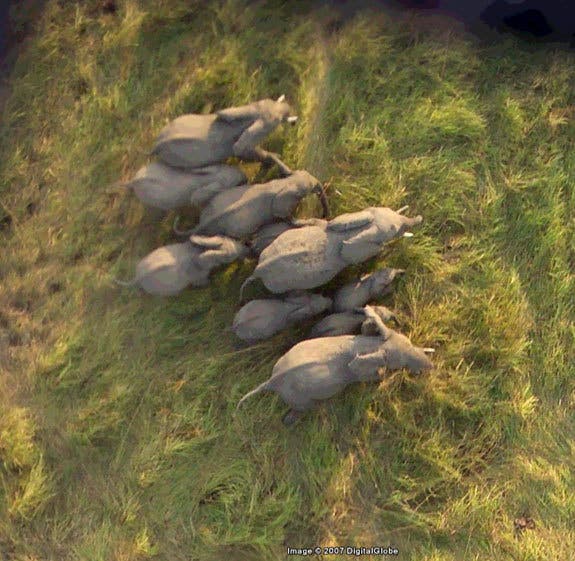 9. The Highest Place … In Your Living Room 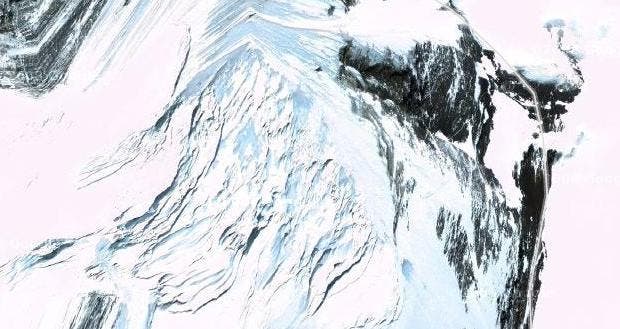 Peeking at 8,848 meters  or 29,029 ft, Mount Everest is the highest place on Earth. Let’s face it, neither of us will ever get to climb it, but thanks to Google Earth, we now have an incredible view of the mountain from the high-up. When I first found it, I was simply stunned by its beauty. Be sure to scroll around it when viewing it – the perspective of it all will undoubtedly send a few shivers up your spine. So serene, yet to deadly! (See on Google Maps | Coordinates: +27° 59′ 9.12″, +86° 55′ 42.38″) 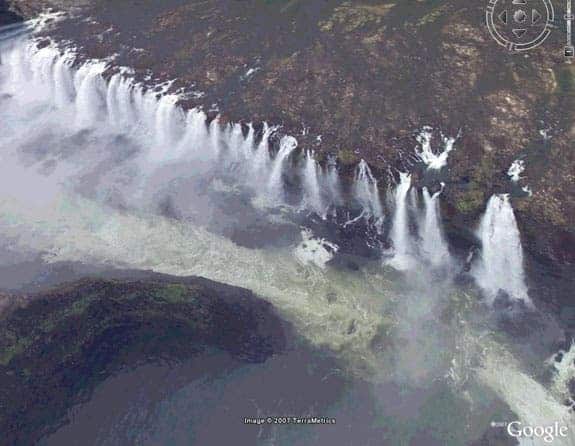 One of the tallest and, at the same time, most spectacular waterfall in the world, Victoria Falls never ceases to amaze people. This true spectacle of nature should be on everybody’s must-see/go-to list, but until you book a flight to Zimbabwe, Google Earth should do the trick. (See on Google Maps | Coordinates: -17° 55′ 31.84″, +25° 51′ 29.60″)

Note: Use the coordinates for inputting into Google Earth. If you’d have the software installed, you can use Google Maps as an alternative. It’s not even half as fun, but still pretty incredible.