The first genetically engineered or biotech food products were released on the market for the first time in 1994. Consumers received them fairly well, and since then more production intensified, such that between 1997 and 2010, the total surface area of land cultivated with GMOs had increased by a factor of 87. In 2011, biotech crops reached 160 million hectares, up 12 million hectares on 8% growth, from 2010.

Last year, on October 31st the global population reached the historical milestone of 7 billion, spurring great concern to governments and common folk alike. The problem is there isn’t currently enough food to feed the whole world. It is believed more than one billion people around the world live in poverty and suffer from hunger, and that by 2050 the world would need 70% more food.

A lot of criticism has been circulating around biotech crops, citing ecological issues, health hazards and even economic concern, since it disrupts markets where conventional crops are dealt. I’m not the keenest supporter myself, but when faced with the numbers and harsh reality, the truth is biotech crops might be the only solution we have to the global hunger crisis.

Genetically engineered food have specific treats or changes introduces that provide a series of improvements in crops, like substantial increase in productivity, protection from pests, weeds, diseases, as well as quality in many cases (a few examples: enhanced Vitamin A in rice, soybean free of trans-fat and reduced saturated fat, omega-3 rich soybean).

Between 1996 and 2010, the environment had a lot to benefit from biotech crops as 443 million kilograms (kgs) of pesticide active ingredient were saved, translating in a 9.1% reduction in worldwide pesticide use in this time frame. In 2010 alone CO2 emissions have been reduced by 19 billion kgs – the equivalent of taking ~9 million cars off the road. Some 16.7 million farmers are currently employed in the production of GE crops, up 1.3 million from 2010. The total industry is currently valued at US$78 billion. 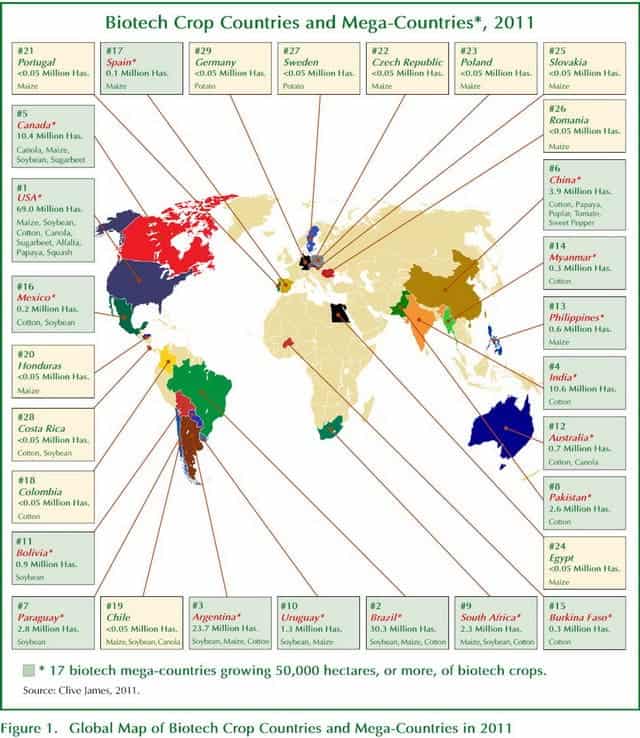 In 2001, the world society gathered and made a pledged, now known as the Millennium Development Goal (MDG), to cut down poverty by 50% until 2015. Poverty in the developing country was at 46% of the population in 1990, while in 2005 it decreased to 27%. Substantial improvements might come once with the introduction of the new generation of biotech crops like drought tolerant maize planned for release in North America in 2013, biotech maize in China, Golden Rice (biotech genetically-modified rice that contains enhanced levels of beta carotene) in the Philippines in 2013/2014, a new biotech potato named “Fortuna” resistant to late blight (responsible for production losses of $7.5 billon worldwide).

Much more in in depth information can be found at the ISAA.
.