Vaccine that works for newborns might save millions of babies

by Tibi Puiu
in Diseases, Health & Medicine
Reading Time: 2 mins read
A A
Share on FacebookShare on TwitterSubmit to Reddit

Babies need to wait until they’re at least two months old for vaccines to work, which leaves  a lot of newborn babies in the world at risk of infections like rotavirus or pneumococcus. Researchers at Boston Children’s Hospital have developed small-molecule compounds that target a particular receptor to generate an immune response. The vaccine is so effective that in some respects the immune system is stronger than in adults. 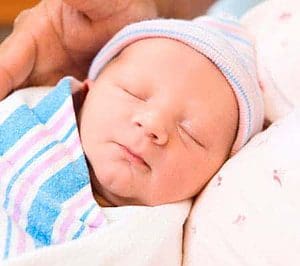 Millions of babies under six months old die every year because of infections, and in poor areas of the world birth is the first and unfortunately only time children come into contact with a hospital. A vaccine that effectively boosts immune response becomes thus indispensable.

Newborn babies lack most aspects of immune response, which is why they’re so vulnerable, the researchers however managed to identify a particular white cell receptor – called Toll-like receptor 8 (TLR 8) – that responds to stimulation.

An array of small-molecule compounds were then tested, known chemically as benzazepines, that targeted TLR 8. After many trials, the scientists settled on a particular compound, called VTX-294, which they found triggered a strong immune response in white blood cells in samples taken from newborn cord blood, as well as adult blood. It induced robust production of cytokines—chemicals that rally the immune response—and proved at least 10 times more potent than the best activator of TLR8 known previously.

“The response was not only equal to that in adults, but VTX 294 was sometimes actually more effective in newborns than adults,” notes Ofer Levy, MD, PhD, of the Division of Infectious Disease at Boston Children, the study’s senior investigator.

“This one receptor seems to lead to more adult-like responses—immediate, short-term responses that are more appropriate for fighting infections,” says David Dowling, PhD, co-first author on the study. “We’re excited about the benzazepines because they are already in the clinical pipeline. That advances the potential for using them in a clinical study in human newborns, once they have been proven safe in animal studies.”

Findings were documented in the journal PLoS ONE.