The PeePoo bag: don’t poop where you eat

Nairobi, Kenya is home to one of the world’s biggest slums, more than one million people living in subhuman conditions in the African state capital. I’ve seen and read a lot of reports from there, and other African states alike, and the situation is indeed dire. Imagine having nothing to eat – now imagine having to poop the scraps of food you manage to go about during the day in the same one room apartment you have to live in.

Although public latrines are common in slums, they’re overused, insalubrious and even dangerous (women and young girls often get raped near latrines at night), so people resort to what’s commonly know as “flying toilets”, which basically means filling a plastic bags with one needs and then throwing it down right the window.

Basic sanitation, like for instance running water, is a far fetched concept for any slum dweller, due to over population and lack of infrastructure. Crap, forget about running water, think about clean water which ever so dim, gets even more contaminated with unfiltered, unsanitized waste. Every 15 seconds a child dies in the world from contaminated water and dysentery or cholera pass for common flues.

Some of you may ask how can something like this be possible in a world that calls itself civilized, where reason and technology are supposed to thrive, however traditional sanitation infrastructure is expensive and hard to implement. Of course, if government officials would start thinking about their people and stop spending western funding on buying a Rolls Royce so they can drive it across the whole 5 miles worth of paved road or on pale, white prostitutes things might have looked different, alas this is a discussion that is both interminable and unpleasant for me to enter here.

Back to Kenya and their sanitation issue, it seems a group of individuals, extrapolated on the crap filled plastic bags hovering over Nairobi and developed, let’s say, a more elegant solution. 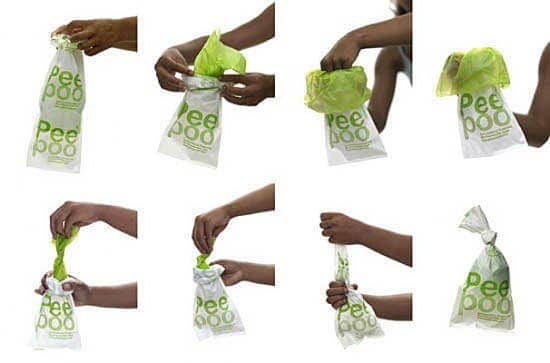 The Peepoo bag is a long thin bag (14 x 38 cm) with a guaze liner, and coated on the inside by a thin film of Urea, which is the most common fertiliser in the world and is a non-hazardous chemical. When this chemical comes into contact with human waste, be it  faeces or urine, an enzymatic breakdown takes place into ammonia and carbonate, driven by enzymes which are naturally occurring in faeces. As the process develops, the pH levels found in waste increase, and as a result hygienization  occurs.  Waste born pathogens (viruses, bacteria and parasites) are killed over a period of a couple hours to a few weeks. Also, the bags are fully biodegradable and are actually helpful for the environment, acting like a fertilizer.

The benefits of this product are evident – waste is no longer moved around, but safely assimilated by the environment and, of course, there’s no water use. I’m a bit confused, however, how this project is actually implemented. Like I said, there are over a million people living in sub-human condition in Nairobi alone. This means, millions of such Peepoo bags are required every month. Who will pay for these, are they free for the every day African? Because it’s pretty clear to anyone from the start that someone who lives on less than a dollar a day won’t pay in his right mind anything for a bag to take a crap in.

The PeePoole behind the project deserve have our recognition, because however difficult to implement the idea sounds, it’s still a step ahead, although I believe Kenya’s, and the whole third world actually, problem lies in the social upbringing and levers. It’s  enough to read some reports written by various peace corps volunteers detailing the African mindset, will or work power, respect for ones country, those around him and even self, education and so on. It’s pretty clear Governments are interested in solving anything, and it’s up to the people over there to help themselves, to an extent.

I’d love to see this project well funded and spread towards other third world countries as well. I’d also love to hear some of your thoughts and remarks on the subject as well, so please don’t be afraid to voice out and leave a comment below the post .

Find out more at www.peepoople.com