Remember and forget at the flick of a button

by Tibi Puiu
in Health & Medicine, Mind & Brain, Science
A A 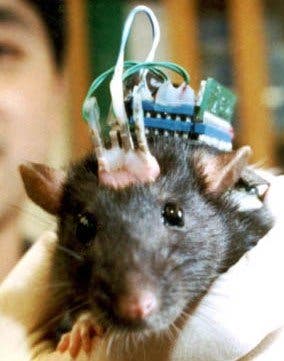 A team of neuro-scientists have managed to restore lost memories to rats by activating a part of their brains through an artificial memory chip – just like a sort of neuro-prosthesis. Further advances backed by this study might lead to the development of important leaps in long-term memory treatment, providing relief for Alzheimer or dementia patients.

Researchers from Wake Forest University and the University of Southern California, trained rats to perform certain tasks like having to pull a lever to receive water. In one case, scientists distracted the rats, forcing them to remember which lever they had to pull. During all of this, researchers attached a set of electrodes to the rat’s brain, connected to two areas in the hippocampus, called CA1 and CA3. The hippocampus is responsible for bridging short-term memory with long-term. As such, as the rats performed various tasks their brain signal between the two regions was monitored.

The rats were then drugged, thus interrupting communication between CA1 and CA3. Immediately, they didn’t know what lever to press next, and which succession respectively, as their long-term memory was basically fried.

“The rats still showed that they knew ‘when you press left first, then press right next time, and vice-versa,’” Theodore Berger said, a biomedical engineering professor at USC and lead author of the study. “And they still knew in general to press levers for water, but they could only remember whether they had pressed left or right for 5-10 seconds.”

The team then attached an artificial hippocampus, which duplicated the natural signals between CA1 and CA3. When turned on, the previously recorded action and order of manipulating the levers stored in CA1 was successfully communicated back to CA3, allowing the rats to perform normally again. When switched off, the rats reverted back to not remembering which action to perform next.

The research, published in the Journal of Neural Engineering, looks terribly exiting, although applications in humans are a long way from being developed. It proves however that neural signals and patterns which are recorded and stored, can be activated though a neural impulse. A device attached to the brain of a patient suffering from dementia, for example, might help him enhance his short-term memory beyond that of a gold fish and thus make him more independent, make his life livable. Researchers plan to text the device next on monkeys, which usually is the last step before human experimentation.

Also, who remembers this episode?