If Americans ate beans instead of beef, the U.S. would realize 50 to 75% of its 2020 GHG-reduction targets.

by Tibi Puiu
in Climate, News, Nutrition
Reading Time: 6 mins read
A A
Share on FacebookShare on TwitterSubmit to Reddit 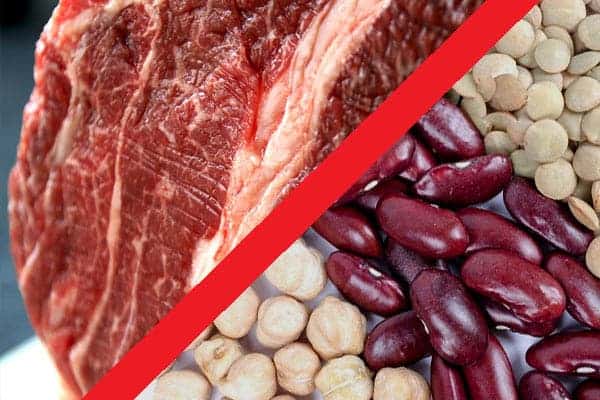 The United States is the second biggest greenhouse gas polluter in the world, after China. At the same time, it’s the most powerful country in the world and much of this prosperity is owed to burning copious amounts of fossil fuels over the past 150 years. In other words, the United States has a social responsibility in front of all the citizens of the world to 1) reduce it’s greenhouse emissions fast and 2) help other nations — particularly the fast rising developing nations — achieve the same goal by transferring technology and funds.

While most Americans believe climate change is real and an immediate threat, when it comes to doing something about it opinions become mixed. And if you say the ‘T’ word, you better run for the hills. No, not Trump — I mean ‘taxes’. But the single, fastest way to cut the nation’s greenhouse gas emissions might not be stripping a tax on the industry or the gas pump. According to researchers from Loma Linda University led Helen Harwatt, giving up on beef in favor of beans would have the most immediate impact on our emissions.

“Given the novelty, we would expect that the study will be useful in demonstrating just how much of an impact changes in food production can make, and increase the utility of such options in climate-change policy,” Harwatt said.

If Americans ate beans instead of beef, the U.S. would realize 50 to 75% of its 2020 GHG-reduction targets

Right now, most of our protein comes from livestock meat, 70% of which is produced in factory farms. This is a highly energy-intensive industry that responsible for 14.5% of greenhouse gas emissions (GHGs); more than all the cars, planes, ships, tanks or any kind of transportation in the world. But not all meats are equal. Beef, for instance, is the most resource-intensive kind of meat to produce  Depending on where it’s grown, one pound of beef uses 1,800 to 2,500 gallons (56 tons to 70 tons) of water and releases 22.3 kg of carbon dioxide equivalent GHG emissions per kilogram. And that’s not counting land use and other resources.

A 2011 report by the Environmental Working Group found that eating one fewer burger every week for a year was the equivalent of taking your car off the road for more than 500 kilometres, and if everyone in the U.S. ate no meat or cheese just one day a week for a year it would be equivalent to taking 7.6 million cars off the road.

Simply put, eating beef driving a lot of global warming and pollution — not only in this country but all around the world. At the same time, beef is an excellent source of protein for millions of people.

So are beans, though.

A 2015 study carried out by a team from the University of Minnesota asked 14 men and 14 women to eat two test lunches which included a ‘meatloaf’ made of either beans or beef. Both meals were matched in calories and total fat. The beef meal provided 26 grams of protein and three grams of fiber while the bean meal provided 17 grams of protein and 12 gram of fiber. All participants didn’t report differences in appetite between the beef and bean meals over the course of 3 hours following their lunch. These findings support the idea that plant-based proteins with high fiber may offer similar appetite regulation as animal protein.

Researchers from the University of Copenhagen performed a similar study and came up with even more interesting findings. Their study which involved 43 young men not only found beans fill the belly better than beef,  they do it on fewer calories. A typical fast food meat patty tallies up about 230 calories but bean burgers, by contrast, average just 115 calories.

The takeaway would be that beans offer a very similar intake pound-for-pound with beef, with the added benefit of being more satiating which helps you lose weight. Beans are also a lot cheaper and contain lots of fiber as opposed to beef. Foods naturally high in fiber lower cholesterol, control blood sugar, regulate bowel movements, help prevent type-2 diabetes, reduces the risk of heart diseases, and more.

“While more studies are needed for a definitive proof, it appears as if vegetable-based meals – particularly those based on beans and peas – can serve as a long term basis for weight loss and as a sustainable eating habit,” concluded th estudy’s lead author Anne Raben in a University of Copenhagen press release.

The most important thing at stake when switching beef with beans, however, is the wellbeing of our planet, though it’s good to know our waistline is also taken care of.

“The nation could achieve more than half of its GHG reduction goals without imposing any new standards on automobiles or manufacturing,” said  Joan Sabate, a co-author of the new Loma Linda University study which assessed the environmetal impact of switching beef in favor of beans.

Substituting beans for beef would also free up 42 percent of U.S. cropland currently under cultivation. That’s a staggering 1.65 million square kilometers or 400 million square acres. This free space can then be used to grow more plant-based foods, including beans, of course, to support a rising population.

All of this sounds rational to most people, I take it, but when confronted with the choice in the real life who can we count on? Americans love beef, especially burgers, so it’s understandable why this might look like a lost cause. That’s not necessarily the case. In 2014, 400 million fewer animals were killed for food because people, mainly Millenials in the United States, chose to eat less meat. Moreover, according to Professor Harwatt, a third of American consumers are now buying meat analogs — plant-based products that resemble animal foods — and the trend is growing. So, there’s a lot to be optimistic about. Besides, people don’t need to give up beef or meat, in general, entirely. That just sounds like too much of a sacrifice and such decisions need not sound like that. Instead, even replacing meat-based meals one day of the week with plant-based products can have a huge impact.

At least, beans are better than another alternative: insects. Previously, a group from the University of Edinburgh, UK, found replacing half of the meat we eat worldwide with crickets and mealworms would cut farmland use by a third, consequently vastly reducing greenhouse gas emissions. There’s also promising progress being made in the field of artificial meats. The price of a lab-grown burger has dropped to $11.36 down from $325,000 in 2012.

“Given the scale of greenhouse gas reductiotens needed to avoid the worst impacts of climate change, are we prepared to eat beef analogs that look and taste like beef, but have a much lower climate impact?” Horwatt asks. “It looks like we’ll need to do this. The scale of the reductions in greenhouse gas emissions needed doesn’t allow us the luxury of ‘business as usual’ eating patterns.”