Learn to play the piano – no attention required

If learning to play the piano while watching television sounds like your thing – this is definitely something you should tune in to. Furthermore, if you already find your tutor helpful, this additional technology can make you a master musician. A computer scientist at Georgia Tech, Thad Starner, and his team, invented Mobile Music Touch (MMT), a rather simple technology which teaches people to play simple piano melodies while they focus on something else. 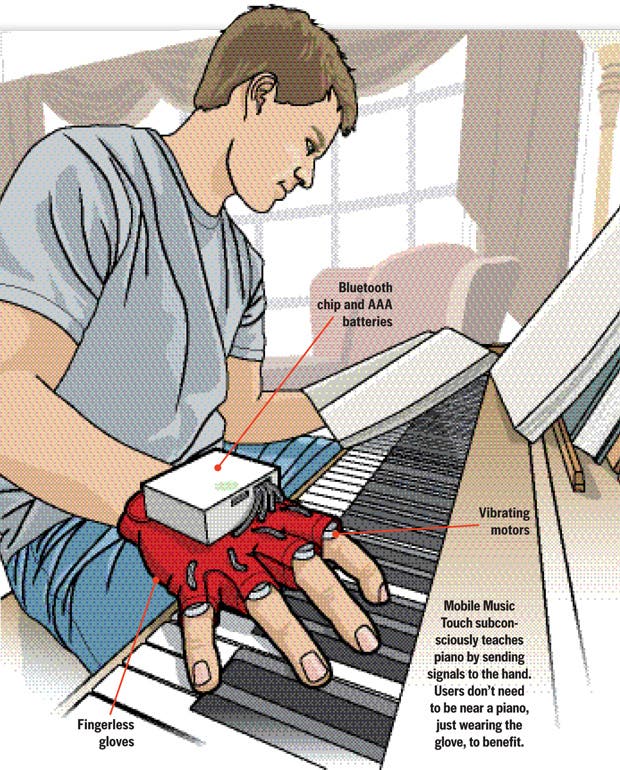 In the tests for MMT, students were able to learn the first 45 notes of “Amazing Grace” in half an hour while studying for GRE exams – and here’s the kicker: MMT didn’t have any negative effect on their GRE results whatsoever.

Starner’s approach takes advantage of muscle memory (or motor learning) a form of procedural memory that involves consolidating a specific motor task into memory through repetition. In layman terms, if you keep doing something, even though you don’t focus on it, you’ll remember how to do it – through repetition, even without concentration, muscles can “remember” patterns. To learn the correct fingering, an MMT user wears a fingerless glove that is connected, via wireless Bluetooth, to a laptop or cell phone that plays a song. A computer software then converts musical to vibrations and practically moves the fingers to the right keys.

However, this isn’t only directed at people who want shortcuts toward learning to play the piano – it could also be used to help people spinal cord injuries. Doing the repeated motion to regain the dexterity after such an accident – and doing them correctly is a tedious task, one that many people don’t manage to do as they should. MMT could do that for you – and here’s an unexpected bonus: not only could it help you with the recovery, but it could also help you learn a new skill in the process.

Starner actually tested patients with quadriplegia and found that MMT boosted hand sensation and agility; particularly noticeable in his study was the case of a man whose quadriplegia kept his hands clenched, but was elated as he learned to play “Happy Birthday” for his grandson.

To further develop, Starner want to see if MMT might help stroke patients regain hand control. He will also expand to other skills, such as Braille or stenography, for instance.