by Mihai Andrei
in Genetics, Health & Medicine, Other
A A

Even though we claim to be living in the third millenium and we’ve “evolved” significantly from say, 50 years ago, there’s quite a number of people that think homosexuality is some sort of disease and should be taken care of. This lack of understanding and, most of all, tolerance leads to a whole number of related problems, including so-called therapists that can “treat” it. This comes just 2 days after the amazing doctor that performed brain surgery while having a heart attack, as if to balance it.

So a significant number of still give treatment that supposedly turns gay, lesbian and bisexual clients become straight, despite the fact that there is no evidence that it works; even more, it might actually be harmful for the patient’s health according to research funded by the Wellcome Trust published in BMC Psychiatry.

“There is very little evidence to show that attempting to treat a person’s homosexual feelings is effective and in fact it can actually be harmful,” says Professor Michael King from UCL. “So it is surprising that a significant minority of practitioners still offer this help to their clients.”

“So-called gay cure therapies are wholly discredited. The conclusions of this research are a welcome reminder that what lesbian and gay people need is equal treatment by society, not misguided treatment by a minority of health professionals.”

So after drawing the line what does that leave us with??

“The best approach is to help people adjust to their situation, to value them as people and show them that there is nothing whatever pathological about their sexual orientation,” King says. “Both mental health practitioners and society at large must help them to confront prejudice in themselves and in others.”

If you ask me, treating people for homosexuality is about as dumb as the picture below. 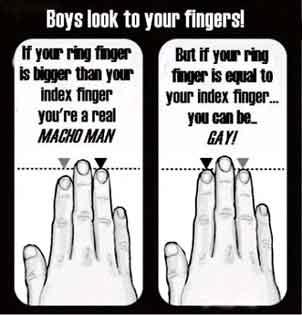