by Mihai Andrei
in Anthropology, Biology, Genetics
A A 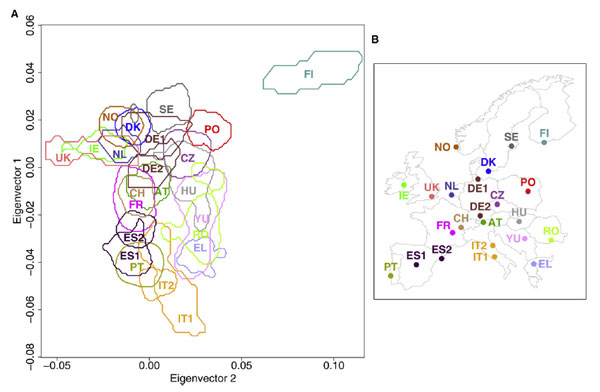 If you ever visited a neighboring country and found that the people there had little or no connection to your own country’s culture, language or even physical appearance, it’s only natural that you wonder how this can be; after all, if the countries share a border, they have to resemble many traits?? Not really. It depends on many factors, but the most important is the genetic traits of the people that first settled there and of those that settled there massively in years to come.

Researchers from the Erasmus University Medical Center in the Netherlands, showing the degree of relationship between countries, and pointing out that despite what many people think, they’re not very different; at least genetically speaking. The map is very easy to read, being similar to an average map in many ways, at least the first map, which shows the location of the populations sampled in the research. The other picture shows the degree in which they relate to each other.

The map has a simple and logic explanation if you just analyze history a bit. Europe has been colonized three times, from the south to the north, and the relationships show pretty clear the pattern of these migrations. What jumps in the eye at first is the difference between Finnish people and every other europeans. This is explained by the fact that the early inhabitants of the country lived in a very small country, and then expanded but didn’t interact with other people, keeping the different genetic traits of their ancestors. The other difference which could seem a bit more surprising is that between the Italians and the other people. This is explained by the Alps, which represented a natural barrier which impeded the flow of people.

You have to keep in mind that the earliest of the migrations mentioned above happened about 10 000 years ago, so the genetic differences have little in common with the cultural differences. For example, Italian and French have pretty similar languages and habits, but genetically, they are very different. The team of biologists tested about 2500 people and analyzed 500,000 sites of common variation of the genome.