by Tibi Puiu
in Genetics, Research
Reading Time: 2 mins read
A A
Share on FacebookShare on TwitterSubmit to Reddit

Barley is a key ingredient in beer, the third most popular drink in the world after water and tea, an industry which currently amounts to $300 billion a year. The quality of the barley greatly influences the savor of beer, so by growing better quality barley we might be able to brew a beer that’s closer to perfection. A worthy cause indeed for science, and with or without this exactly in mind, an international consortium of scientists have recently published a  high-resolution draft of the barley genome, allowing scientists onward to improve yields and disease resistance, and maybe equally importantly brew a better beer. 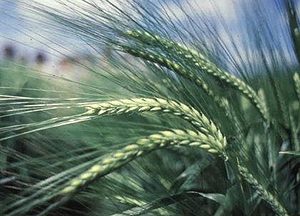 Barley is  the world’s fourth most important cereal crop in terms of area of cultivation and quantity produced. Mapping its genome is a first critical step to engineering variants that can cope with the demands of climate change and are resistant to the various disease that currently plague barley and amount to billions in damage, worldwide. For instance, before the 1990′s Minnesota had millions of acres of barley. Today that has dwindled to about 120,000 acres because of an epidemic of Fusarium head blight.

“This research will streamline efforts to improve barley production through breeding for improved varieties,” said Professor Robbie Waugh, of Scotland’s James Hutton Institute, who led the research. “This could be varieties better able to withstand pests and disease, deal with adverse environmental conditions, or even provide grain better suited for beer and brewing.”

The team of researchers, , consisting of scientists from 22 organizations around the globe and called the International Barley Genome Sequencing Consortium (IBSC), published a first high-resolution draft of the barley genome, revealing structure and order for most of its 32,000 gene. Their research, however, wasn’t without obstacles. For one, the barley genome is almost twice the size of that of the human genome; moreover, the barley genome contains a large proportion of closely related sequences that are difficult to piece together into a true linear order. These challenges were overcome with success, eventually.

Their results will help scientists produce better quality and more resistant barley, indispensable to beer and whiskey production, but also to the meat and dairy industries, where barley is a principle animal feed product.

“It will accelerate research in barley, and its close relative, wheat,” Waugh said. “Armed with this information breeders and scientists will be much better placed to deal with the challenge of effectively addressing the food security agenda under the constraints of a rapidly changing environment.”