by Tibi Puiu
in Discoveries, Health & Medicine
A A 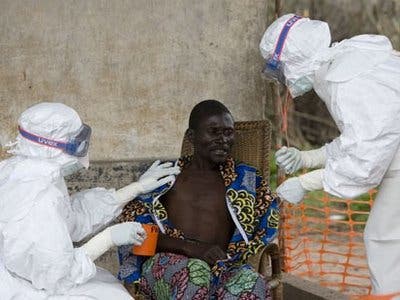 The Ebola virus has been the subject of numerous panic inducing books and movies, portraying it as a devastating killer, and in all seriousness its quite deadly. Research on the virus and its numerous variation has made across the past decades, but so far little to no advances in prevention have been made and currently there is no available treatment for the disease.

In a major breakthrough, scientists have now found at least one way to block the Ebola and Marburg, its close relative, viruses from entering the body. Researchers suspected the virus first infects the body through the cells in the eyes and nose, and upon closer inspection  they found that the mucosal parts of the body – the lining of the lungs, nose, and eyes, have a protein newly dubbed TIM-1, which basically acts as a receptor for Ebola and Marburg.

Afterwards, scientists simply inhibited the TIM-1 receptor through the use of an antibody, called ARD5. Tests were made using the Zaire Ebola virus – this is the strain of Ebola that was estimated to kill between eighty-three and ninety percent of people infected with it. What they found is that the ARD5 successfully blocks the virus from entering the cells.

Ebola is a devastating disease, characterized by a painful hemorrhagic fever, by interfering with the endothelial cells lining the interior surface of blood vessels and with coagulation. As the blood vessel walls become damaged and destroyed, the platelets are unable to coagulate, and patients succumb to hypovolemic shock.

It is believed that the virus is transmitted through bodily fluids, and although this latest research doesn’t provide a full Ebola prevention shield, it will however protect anyone who comes into contact with the virus by inhaling droplets that were coughed into the air by an infected patient or touching an infected surface, which are the main sources of contact with the virus. Simply by inhibiting these sources, the world would become a safer, Ebola free place.