The new age of censorship.

by Mihai Andrei
in Climate, News, World Problems
Reading Time: 4 mins read
A A
Share on FacebookShare on TwitterSubmit to Reddit

The US Environmental Protection Agency has started revamping some of its science websites, to reflect the new agenda under President Trump and administrator Scott Pruitt. Normally, we wouldn’t be too worried about this, but since they have both taken climate change denial positions and blatantly supported the fossil fuel industry, this may be more than just a couple of tweaks.

Trump vs the environment 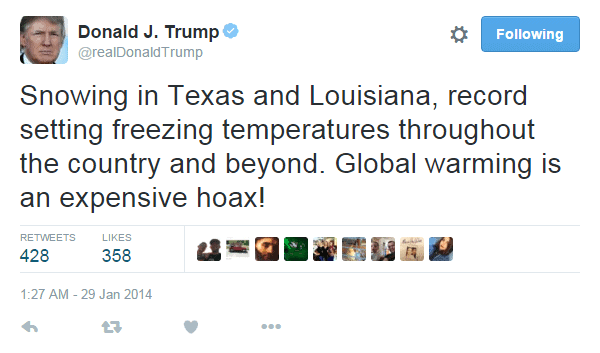 If you’re unfamiliar with the EPA and its recent context, the agency was created for the purpose of protecting human health and the environment by writing and enforcing regulations based on the US laws. It employs some 15,000 workers, half of which are are engineers, scientists, and environmental protection specialists. After the recent elections which sent Donald Trump to the White House, the EPA has been under a tremendous and unjustified pressure.

For starters, Trump put forth plans to cut the EPA’s budget by 31%, from $8.1 billion to $5.7 billion and cut down about a quarter jobs. He also appointed Scott Pruitt as the head of the agency, which already turned out to be an unfortunate decision — for the EPA and the environment itself. Scott Pruitt didn’t take long to out himself as a climate change denier, saying that CO2 doesn’t cause climate change, something which goes against centuries of research and on which there isn’t even a debate. I don’t think there’s a ‘climate change denial ranking,’ but if there was, this statement would be a top contender — even ranking higher than Trump’s own statements on global warming. Of course, researchers quickly dismissed Pruitt’s false claims, but this was a clear sign of a new direction for the EPA: an anti-scientific and anti-environmental direction.

Another telling sign was the brief but very acute media blackout Trump ordered on the EPA. He also told employees to ‘cut climate change webpage’ and… this may very well be what is happening now.

Ironically, one of the EPA’s own web pages disagreed with Pruitt and Trump, citing findings of the United Nations’ Intergovernmental Panel on Climate Change. It also contained scientific explanations of climate change, its causes and consequences, and how all this relates to fossil fuels. That media page has been taken down, after almost 20 years.

“If you are looking for information on “climate change,” “the greenhouse effect,” or “global warming, ” you’ve come to the right place,” it declared in August 1997. “At this web site you will find information pertaining to the science of global warming; current and projected impacts of global warming; international and U.S. Government policies and programs; opportunities for individuals and corporations to help stop global warming (and in many cases, save money, too!); state and local actions that help mitigate greenhouse gas emissions; and, easy ways to obtain more information by fax, email and electronic order form.”

Among the pages which have been taken down, there were datasheets on greenhouse gas emissions, detailed information about the Clean Power Plan, and data on how environmental issues affected different demographic groups. All those have been replaced with a vague statement:

“Thank you for your interest in this topic. We are currently updating our website to reflect EPA’s priorities under the leadership of President [Donald] Trump and Administrator Pruitt.”

EPA spokespeople have argued that nothing massive will change, and all this is just done to “eliminate confusion”

“As EPA renews its commitment to human health and clean air, land, and water, our website needs to reflect the views of the leadership of the agency,” J.P. Freire, the agency’s associate administrator for public affairs, said in a statement. “We want to eliminate confusion by removing outdated language first and making room to discuss how we’re protecting the environment and human health by partnering with states and working within the law.”

Are we getting too worked out about this? That’s possible, but given the overall trend of the Trump administration, I think it’s safe to say all things with ‘environment’ written on them have a big red target attached. Shortly after President Trump was elected, many researchers from the Department of Energy and EPA started archiving data out of fear these might get destroyed. We’re also past the point where insurances coming from the White House can be taken seriously. After the whole charade with the “alternative facts” and after many lies have been perpetuated by Trump and his administration, I would not give two cents on reassuring statements from EPA spokespeople.