by Mihai Andrei
in Environment, Renewable Energy
Reading Time: 3 mins read
A A
Share on FacebookShare on TwitterSubmit to Reddit

The falling cost of renewable energy shouldn’t surprise anyone by now – all we’re waiting for is the tipping point where some type of renewable energy becomes more cost effective than conventional energy – but what if we’ve already reached that point? 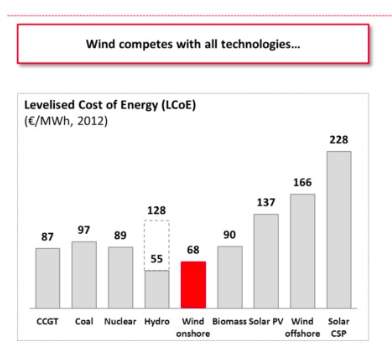 Portugal is one of Europe’s (and the world’s) leading countries in terms of renewable energy. More than half (58,3%) of the country’s energy came from renewable sources, with wind accounting for almost a quarter of the total consumption (23%). But Portugal might be preparing for even greater things – going full renewable.

EDP, the national energy company, which also hold important operations in Brazil, have equal opening to conventional and renewable energy. They are not interested in pushing renewable energy sources or having a positive environmental impact, they are interested in making money. In a new presentation, they explain that onshore wind is the cheapest of any new utility scale technology – and this goes for all of Europe. As you can see for the slide above, it’s about 30% cheaper than coal, 20% cheaper than gas, and the only alternative which is better is hydro power, but only in countries with special geographical conditions.

EDP’s head of renewables Joao Manso Neto explained that for the US, the differences are even larger, where recent contracts have been struck between $20/MWh (15 euro) and $40/MWh(30 euro).

“It is clear, more and more, that our product (wind energy) is good, not just because it is green, but because it is cheaper,” Neto told the analysts. (You can see the presentation here). He said wind energy is also cheaper than gas in key emerging markets such as Brazil, South Africa, Mexico, and major Asian markets.

He believes that the only reason we’re not seeing more wind energy spreading is a perception – the perception that renewable energy sources are more expensive – even when it’s growing more and more clear that this is false. He also underlines that the “less educated” usually look at the spot price, but this only reflects market dynamics and the level of supply and demand, not the cost of the technology. New build coal is also “three times the market price”.

In US, Canada, Australia, and, to a lesser extent, Europe,  incumbent generators and those that seek to protect them, are simply trying to stop the introduction of new generation – be it green or brown or black – because it will make older and less efficient coal and gas generator uneconomic. To put it simply, those who make money by selling energy are trying to stop the emergence of new technologies, even when they are more cost effective.

Meanwhile, all wind energy needs is an equal playing ground – and it will thrive!

“Wind is not only competitive, it is prepared to compete,” Neto says.

Meanwhile in Australia, at the other end of the spectrum, the political leaders of the country insist on creating an environmental and scientific disaster: former Queensland Treasurer Keith De Lacy said renewables had “no place in a modern society” and Institute of Public Affairs’ Alan Moran, claims that that wind energy is “three times” the cost of coal.