In case you didn’t know, China has a massive problem with smog; the dark shroud has covered a large part of the country, with Beijing suffering for several days now. But instead of getting better, the situation seems to be worsening day by day; now, Shanghai seems to be feeling the effects of the smog as well. 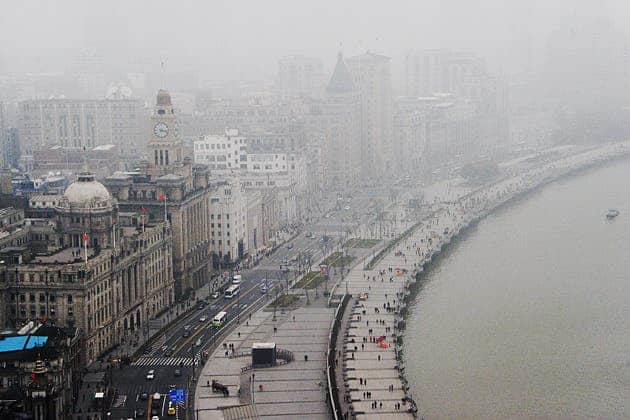 I’m not going to discuss how China only has itself to blame for this situation, and how the forced marching industrialization cannot be a good thing in the long term, I’ve already done this in several articles. It’s interesting however to see how companies and people are coping with this matter. Toyota, for example, has put more green plants in its Beijing office to help improve the quality of the air. Most companies, including JP Morgan and Honda are distributing free air masks to employees – unmasked people on the streets of Beijing have quickly become a rarity – you can see the Beijing smog from outer space.

In Shanghai, the official China Daily newspaper reported on Jan. 29, “residents living in the Yangtze River Delta breathed the most polluted air in five years during the past two weeks.” Meanwhile, officials are trying to make this problem a little cuter, with an anime-style cartoon of a girl in pigtails – how else? The girl smiles when the air quality is good, pouts when pollution is moderate, and sobs when the smog is very serious; she also changes her hair colour from green to red depending on air quality.

The only good thing worth noticing is that Beijing, Shanghai, and five other major manufacturing areas in China this year will launch pilot programs to cut carbon emissions. By 2015, according to Bloomberg New Energy Finance, this program will regulate up to 1 billion tons of emissions, making China trail only Europe in terms of environmental measures.