by Mihai Andrei
in Eco tips, Environment
Reading Time: 2 mins read
A A
Share on FacebookShare on TwitterSubmit to Reddit

It’s 1960, a nice Sunday, Easter day. David Latimer decides to do something special to mark this day, and he starts a bottle garden in his ten gallon carboy. 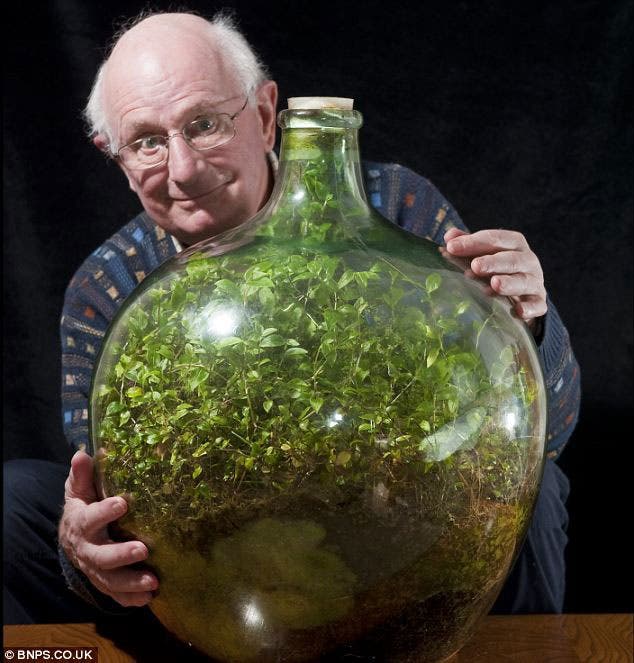 He poured in some compost, a quarter pint of water and then, carefully added some spiderwort seedling (Tradescantia) using a piece of water. He then placed the bottle garden by a sun-filled window in his home leaving photosynthesis to do its thing.

12 years after that, he opened his garden and gave it another drink of water – and it’s been closed ever since – since 1972! So how does this work exactly, how come the plants are still fine? Is there something special about this particular bottle garden?

No, not really. Bottle gardens work if they are really well sealed. If this is the case, it becomes a self sustainable environment, and all it needs is sunlight. Plants survive by using photosynthesis to recycle nutrients, using cellular respiration to break down decaying material shed by the plant. Basically, the bacteria in the soil absorbs the plant oxygen and releases carbon dioxide, which is then used by the plant to grow, releasing oxygen, and so on; meanwhile, the water gets taken by the roots, is eliminated through transpiration where it condenses and drops down so the cycle can start again – truly a self sustainable ecosystem!