For the first time in history, solar jobs outnumber coal jobs in Virginia

It's not even surprising -- renewable energy continues its spectacular advance.

by Mihai Andrei
in Renewable Energy
Reading Time: 3 mins read
A A
Share on FacebookShare on TwitterSubmit to Reddit

Virginia is one of the traditional “coal states” — but even there, renewable energy has a strong foothold. For the first time ever, Virginia has more solar than coal jobs. 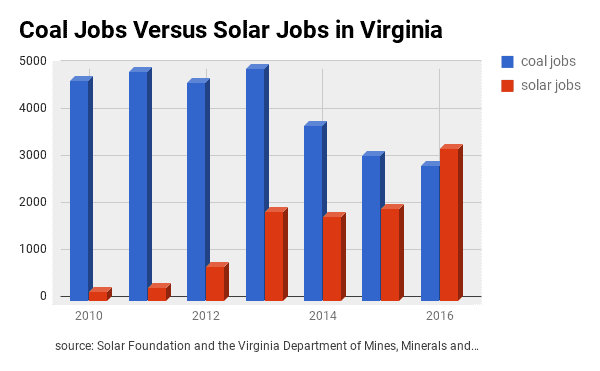 The economic benefits of renewable energy are sending ripples throughout the world, despite the best efforts of the US administration. Even as President Trump is leading an all out war on clean energy and tries to support fossil fuels instead, renewables still prevail. Numbers from the Virginia Department of Mines, Minerals and Energy show a 40% drop in the number of people working in the coal industry in the past five years. At the same time, the number of jobs in the solar industry has grown more and more, up until parity was reached — and overcome.

Numbers from the Solar Foundation show that the industry grew by about 65% over the last year alone. Most of the jobs were in installation, construction, and manufacturing. But while this is good for both the economy and the environment in the long run, in the short run, employees might not be so happy. Although there are more jobs overall and although re-training projects for coal workers exist, solar jobs are normally not as well paid as coal jobs, something which of course, will cause a lot of frowns in Virginia and similar states.

“If you had to take another job, in this area especially, you’re going to take anywhere from a 50 to 70 percent pay cut to what the next best thing that’s out there,” says Craig Williams, who works as a foreman at Consol Energy’s Harvey mine, about an hour south of Pittsburgh.

This is also not an isolated trend. According to CNN, solar employment expanded last year 17 times faster than the total US economy, according to an International Renewable Energy Agency report. While coal still generates more energy than solar in the US, the latter employs twice as more people (which is normal for an industry that’s still at an incipient stage).

The divestment from coal continues, but Trump and others continue to promise that “they’ll bring coal back.” Unfortunately, they don’t really mean they’ll bring jobs back, because nowadays coal doesn’t really provide that many working opportunities. Automation and a market decline that’s been going on for decades mean that the overall trend of coal jobs will continue to decline. What “bringing coal back” in this case means increasing the profits of companies, as the video above illustrates. If we really care about the traditional coal communities and want to ensure their livelihood in the future, we have to facilitate their shift to other industries. Sure, it might not be as high paying, and it’s hard to learn a new skill, but it’s better than being lied to. Taking a sip of the sour truth is much better than taking a big bite of a sugar-covered lie.