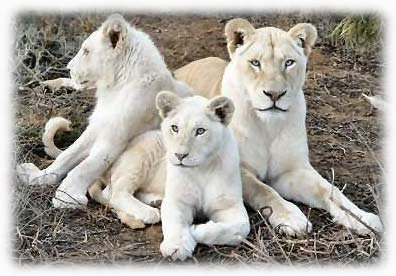 In what is the culmination of years and years of work in the White Lion Project, a pride of white lions has been released in the Sanbona Wildlife Reserve in South Africa’s Western Cape Province. The project is sponsored by Shamwari Dubai World Africa Conservation team. Here is a small video of these African white lions.

They have this colour because of a recessive mutant gene, and they’re also called blond lions. This means that if an offspring gets two copies of that recessive gene, he will also have the trait, which in this case is blondness. The pride (which consists of two adult males and two juvenile females) are an addition to the very slim population of white lions.

“I think [the white-lion mutation] might have been observed in a wild population of lions in South Africa. We’ve seen naturally occurring mutations from time to time in the wild,” said George Amato, a conservation biologist and geneticist at the American Museum of Natural History in New York, but who was not involved in this project.

“The best way to try to create more of them is to inbreed them,” Amato told LiveScience. “But then there are a lot of problems with inbreeding, because not only are you more likely to get two copies of that same mutation [for white coloring], you’re also likely to get two copies of the rare deleterious mutations that all individuals have. That’s generally why inbreeding is bad.”