The ‘orange goo’ in Alaska is actually fungal spores 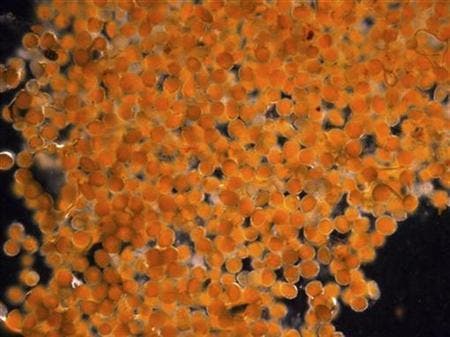 The orange goo that collected on the shores of Alaska and baffled scientists at first was believed to be a mixture of microscopic eggs and/or embryos deposited by some sort of crustacean. However, researchers at NOAA’s Center for Coastal Environmental Health and Biomolecular Research, based in Charleston, South Carolina conducted another examination and concluded that in fact it is of fungal origin.

The material is consistent with a species that causes a plant disease, “rust”, which infects plants and impregnates them with a rust-like colour.

The spores are unlike others we and our network of specialists have examined; however, many rust fungi of the Arctic tundra have yet to be identified,” Steve Morton, a scientist with the NOAA Charleston lab, said in a statement.

When the material first washed up on the shore, locals were afraid it was pollution, and for good reason – the Red Dog Mine is the biggest zinc producer in the world. However, the material is harmless to humans, even though it can be deadly for plants.

“Rust is a disease that only affects plants, so there’s no cause for alarm,” she said, adding that details about its origins remained a mystery. “There just has not been a lot of research done on rust fungi in the Arctic. This is one that we’ve never encountered before that we know of,” she said.