Massive sinkhole opens up in Ottawa, thankfully without victims

Authorities evacuated people and closed off the area to traffic, while they find a way to stabilize the collapsed area.

by Alexandru Micu
in Environment, Geology, News, Science, Videos
A A
Share on FacebookShare on TwitterSubmit to Reddit

A massive sinkhole formed in Ottawa, Canada on Wednesday 8th of June, leading to the collapse of one of the city’s busiest streets and damaging gas and water lines in the area. Gas, electrical and water services in downtown Ottawa are temporarily cut off and roadblocks set in areas of the city while authorities scramble to stabilize the area.

First signs of the sinkhole forming were reported at around 10:30 local time on Wednesday near the Canadian Parliament building in downtown Ottawa, Canada. The area, which grew to a large section of the Rideau Street, eventually collapsed later in the day. The street has been closed off to most traffic for some time now — except for a few taxis, buses and pedestrians — due to ongoing construction works. Several nearby buildings had to be evacuated but there thankfully were no immediate reports of injury or deaths caused by the collapse.

Some suggest that the ongoing work on the underground railway system below Rideau Street may have lead to the collapse, but it is still unclear whether the ongoing project had something to do with the appearance of the sinkhole, said Ottawa Mayor Jim Watson. The city is largely built on a type of soil known as Leda clay or quick clay, known for its tendency to collapse. It’s not the first time such a collapse happened in the city; in 2014, a smaller sinkhole formed in an area east of the city, believed to have been caused by a failure in a water line. In 2010 a massive sinkhole suddenly collapsed in north-east Montreal, destroying an entire house and killing four people.

But no matter how it formed, authorities are now looking for solutions, trying to figure out the best way of patching up the massive sinkhole that is now causing a major disruption in one of Ottawa’s primary streets. City officials were forced to temporarily cut off some water, gas and electrical services in downtown Ottawa and roadblocks had been set up as well in different parts of the city for public safety.

“All hands are on deck to make sure the site is secured and no harm is done to any individual,” Watson told reporters on Wednesday.

Watson said they are planning to use a special type of concrete to help stabilize the sinkhole. This might take some time, however, and people should be prepared for some delays. 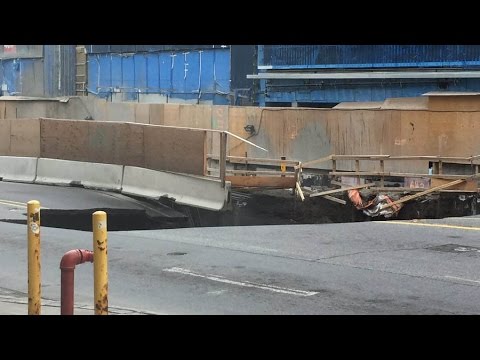