Loggers burned Amazon 8 year old tribe girl alive, as part of a campaign to force indigenous population out of the land

This is truly one of the days when you could feel ashamed to be human. According to reports, loggers in Brazil captured an 8 year old girl from one of the Amazon’s last tribes and burned her alive, in an attempt to force tribes out of the territory. 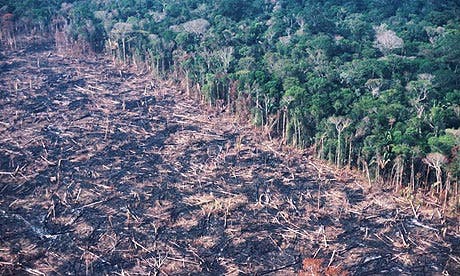 Indigenous people from the Amazonian basin have always been mistreated and even killed since the days of colonization, but to have something like this happen in 2012, for the sake of deforestation – this is something which absolutely blows my mind. It all started with the accusations of a local tribe leader from the Brazilian state of Maranhão who spoke with Terra magazine; the carbonized body was found, and an alleged video appeared too, but hasn’t been made public.

“The loggers were buying wood in the hands of the [Guajajara] Indians and found a little girl [from the tribe Gwajá]. And they burned the child. It was just pure evilness. She is from another tribe, they live in the woods, and have no contact with white people,” said the Guajajara leader.

This is only an outburst of the treatment tribesmen usually get, which often includes beating and abuse – 450 tribes people have were murdered in Brazil between 2003 and 2010. Authorities in Brazil admit this is not an isolated case, but claim that it is still not clear if loggers can indeed be blamed for this one, and they are “urgently investigating the case“. Personally, I would really, really be happy if this turned out to be false, but logic tells me in the not-so-distant future, the Amazonian tribesmen will become extinct, leaving behind a deforested scenery with no witnesses.