Talk about pulling your weight!

by Mihai Andrei
in Environment, News
Reading Time: 4 mins read
A A
Share on FacebookShare on TwitterSubmit to Reddit 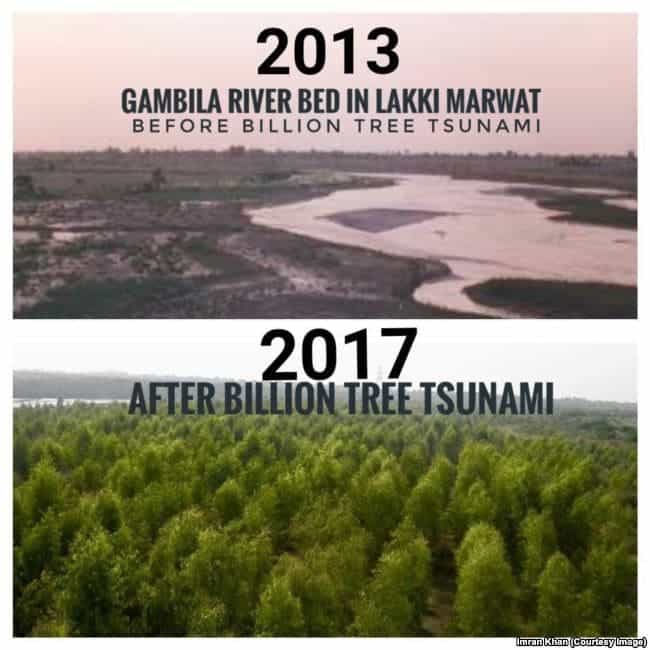 Pakistani provincial leader Imran Khan started the Billion Tree Tsunami Afforestation Project in 2015 and it now reached fruition. In less than two years, 1,000,000,000 trees were planted, even faster than anticipated (by the end of 2017). This is just one province in one country.

You don’t even need to care for the environment to understand why this is a good idea — it’s not just that they store CO2, trees provide a whopping number of environmental services. They regulate water regimes by intercepting rainfall and regulating its flow through the hydrological system. They maintain and ensure soil quality, preventing erosion, and they’re key components in a wide array of ecosystems.

“If you plant trees, we have discovered, by the river banks it sustains the rivers. But most importantly, the glaciers that are melting in the mountains, and one of the biggest reasons is because there has been a massive deforestation. So, this billion tree is very significant for our future,” Khan, leader of the Pakistan Tehreek-e-Insaf party, told Voice of America.

We’re also dealing with a deforestation planetary crisis. According to the World Bank data, the planet has lost 1.3 million square kilometers of forests since 1990. This is why the International Union for Conservation of Nature (IUCN) set up the Bonn Challenge in 2011. The Bonn Challenge calls for the global restoration of 150 million hectares of deforested and degraded lands by 2020, and 350 million hectares by 2030. So far, less than 30 countries have signed up to the challenge, but even so, there are reasons for optimism. This milestone achieved in Pakistan is one of them, one which will inspire others, Inger Anderson, director general of the IUCN says.

“IUCN congratulates the province of Khyber Pakhtunkhwa [where the trees were planted] on reaching this momentous milestone,” Anderson said. “The Billion Tree Tsunami initiative is a true conservation success story, one that further demonstrates Pakistan’s leadership role in the international restoration effort and continued commitment to the Bonn Challenge.”

Pakistan is one of the countries experiencing the most deforestation, and also one of the most at risk of global warming. Decades and decades of deforestation have cleared the country to the point where only 3% of it is covered by forests. Nowadays, the government in the north-western region has banned the cutting and felling of most trees in the area, but the so-called “timber mafia” still operates around the region, illegally destroying trees and forests. While enforcing the law is still problematic, projects such as this one could determine the local communities to play a more active role. Up until now, this is exactly what they’ve been doing.

“But we could not have done it if the local communities were not involved,” Khan said. “The local communities first grew the nurseries and then amongst them people who then protected the trees, the saplings when they were planted. It is one of the most successful experiments ever, and we have 85 percent survival rate.”

In order to ensure the success of this story, over 13,000 small-scale nurseries, producing up to 25,000 saplings each, have been involved in the project. The provincial government offered a cash advanced and a guaranteed purchase after the trees mature. Several species were planted, including pines, walnuts, and eucalyptus, officials say. The estimated cost of this project was $123 million, but it’s not just the trees — the project also generated green jobs, and empowered unemployed youth and women in the province. Given its success, it’s been decided that an additional $100 million will be allocated to maintain the project through June 2020. This will ensure even more environmental services and benefits for the locals, the entire country, and the entire world.