by Mihai Andrei
in Green Living, News, Renewable Energy
Reading Time: 3 mins read
A A
Share on FacebookShare on TwitterSubmit to Reddit

Forget potato clocks – this is the real deal. Plant-e, a start-up company in the Netherlands created promising new technology which harvest electricity from plants. So far this month, more than 300 LED lights were illuminated by the Dutch company, in a promising proof-of-concept. They also demonstrated that they could power up cell phones and Wi-Fis.

Generating electricity from thin air sounds like a dream come troue, but that’s exactly what Marjolein Helder, the CEO and co-founder of Plant-e claims her company can do. They debuted the “Starry Sky” project in November 2014 at an old ammunition site called HAMbrug, near Amsterdam, and are using the same technique close to their headquarters in Wagenigen.

Using plants to extract energy is not exactly a novel idea – potato clocks have been the shock of science fairs for decades, but from what I found, this is the first project that uses plants to harvest energy without actually damaging them. But while adding this technology in places like the Netherlands is cool and will generate clean energy, what they really want to do is install it in existing wetlands and rice paddies where electricity can be generated on a larger scale. This could give power to some of the world’s poorest places.

At the moment though, the main problem is the quantity of energy which it generates. Simply put – it’s not enough. But researchers working on the technology are optimistic they will be able to improve it. Ramaraja Ramasamy, an adjunct professor at the University of Georgia College of Engineering explains:

“It’s not making enough energy to have any reliable commercial product. That doesn’t mean that it will not be. We are too early in the research,” Ramasamy explained. “If I come to you and say, ‘Do you want to power that 100-watt bulb?’ You probably need an acre of land and dirt to get the electricity from. Is that feasible? No.” 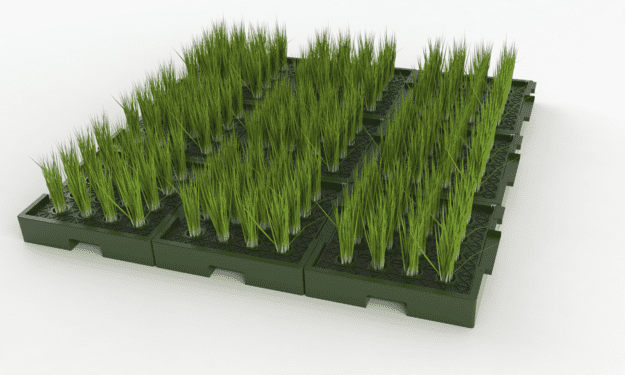 If we put some numbers down, a one-square-meter garden should be able to produce 28 kilowatt-hours per year. According to the US Energy Information Administration, the average American house required approximately 10,837 kilowatt-hours in 2012. But a Dutch house requires about three time less energy, and a house in rural China or India – even less. That means that while you could barely power up an American house with a big backyard (which is pretty good in itself), you could power up entire villages in the vecinity of rice paddies.

This would require the company using existing wetlands to generate electricity – something which they are working on, but have not yet managed to achieve. The system would involve placing a tube horizontally below the surface of a wetland, peat bog, mangrove, rice paddy, or river delta, and use the same process as the modular system. The problem they are facing now however, is financing.

“Modular systems are interesting, but you can only scale up to a certain size because it’s pretty labor- and material-intensive,” Helder said. “A tubular system can just be rolled out through the field and it just works because the plants are already there. So for the longer term, for the really large scale, that’s much more interesting.”

This tubular system is at least a couple of years away from actually becoming a reality, but there are some good prospects. Meanwhile, the company is already selling products which enable you to harvest energy from plants.

What do you think, is this technology really innovative and full of potential, or is creative, but not practical at all?