by Mihai Andrei
in Animals, Physics, Studies
A A

Pollination is the game, “summon bees” is the spell, and electricity is the mana – that’s how I’d try to explain it to a gamer. A little more on the serious side, flowers advertise presence of nectar to bees using electrical signals, basically indicating if they’ve been visited by another bee or not. 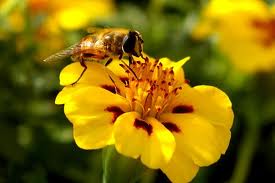 Usually, plants are negatively charged and emit weak electrical signals; on the other hand, bees zip and zap through the air, picking up a positive charge. When a bee goes close to a plant, it doesn’t exactly create sparks, but it does create a small electric field which can convey information. The flowers’ use of electric signals to communicate with potential pollinators adds another weapon to their already impressive arsenal of visual, ultraviolet, and fragrant advertising methods.

“This novel communication channel reveals how flowers can potentially inform their pollinators about the honest status of their precious nectar and pollen reserves,” says Dr Heather Whitney, a co-author of the study.

Researchers placed electrodes in the stems of petunias, showing that when a bee lands on the plant, the flower’s electrical potential changes and remains changed for several minutes. They also showed that bees can distinguish between different floral electric fields that have or haven’t previously changed, thus knowing if another bee has visited the flower recently or not.

This idea was further explored with a learning test the bees took The test showed that when electric signals were present in conjunction with colors, the bees were much faster at ‘learning’ to distinguish between the colors. However, as clear as it is that bees distinguish between different electrical fields, researchers are quite puzzled on how the insects do it.

“The discovery of such electric detection has opened up a whole new understanding of insect perception and flower communication.”, they explained.

As it turns out, there’s a lesson in good advertising to be learned here. Since bees are quick learners, they’ll also learn if a plant “tricked” them – if she advertised having nectar, but doesn’t really have it . Professor Daniel Robert said:

“The last thing a flower wants is to attract a bee and then fail to provide nectar: a lesson in honest advertising since bees are good learners and would soon lose interest in such an unrewarding flower. The co-evolution between flowers and bees has a long and beneficial history, so perhaps it’s not entirely surprising that we are still discovering today how remarkably sophisticated their communication is.”

The research was published in Science Express