The man who farms the sea

by Mihai Andrei
in Chemistry, Climate, Environmental Issues
Reading Time: 2 mins read
A A
Share on FacebookShare on TwitterSubmit to Reddit 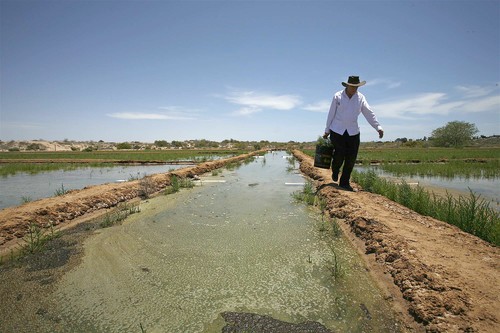 A few miles inland from the Sea of Cortez, cracked earth contrasts with the clear, cloudless sky to create a beautiful yet cruel and unforgiving landscape. Here, resources are scarce and people are even fewer. Still, one man fights agains all these adversities; amid mosquitos, cactus, and an almost unbearable heat Carl Hodges manages to create fluorishing crops.

He is the founding director of the University of Arizona’s highly regarded Environmental Research Lab and his amazing work has attracted quite a few workers, both qualified and not. Hodges spent most of his 71 years figuring out how humans could gather enough resources to live in places where usable water and good soil are almost inexistant.

The crop is salicornia and Hodges and his team have flooded the plots with saltwater from the Sea of Cortez, located nearby. The crop which relies on ocean water has the potential to feed and fuel millions. Flowing from a man made canal, this kind of water is accessible in many places where otherwise, the possibility of a good crop wouldn’t exist. With his trademark had contrasting with his iPhone, Hodges has seen a fantastic opportunity to use salt water and direct it inland and create wealth and healthy food instead of disasters. The atmospheric physicist, far from the crowd and media, seems to have found a key that many have been looking for but failed to find.

Analyzing recent projections of ice melt occurring in the Antarctic and Greenland he calculated that diverting 3 times the water Mississipi has would be just enough to achieve the goals he has set. He wants to channel and use ocean into some artificial rivers to “feed” commercial aquaculture operations, mangrove forests and crops that produce food and fuel. This could mean an increase of millions of acres of productive farmland.

“The only way we can stop [sea-level rise] is if people believe we can,” said Hodges, whose outsize intellect is exceeded only by his self-assurance. “This is the big idea” that humanity has been waiting for, he believes.