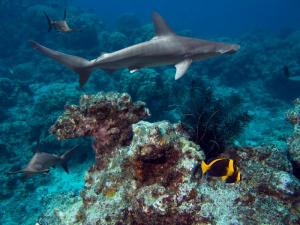 A long time ago, sharks had no natural enemy; they were on top of the trophic chain. All this has changed when man entered the chain, and suddenly (in geological terms) there was no animal safe; some were forced into extinction, many more were threatened, and all feared dire days.

Although this may sound a bit metaphorical and even a bit exagerated, you’d be surprised to see how close to the truth that sentence was. I don’t know about you, but my heart just keeps getting smaller and smaller with each news about a species which is almost extinct; and when even the mighty shark, which symbolizes survival, adaptability, practically invincibility is threatened, you just don’t know where this is going to stop. The fact is that sharks are dissapearing from the world’s oceans; and for what ?! The numbers of many large shark species have declined by more than half due to increased demand for shark fins and meat, recreational shark fisheries, as well as tuna and swordfish fisheries, where millions of sharks are taken as bycatch each year.

“As a result of high and mostly unrestricted fishing pressure, many sharks are now considered to be at risk of extinction,” explained Julia Baum, a member of the IUCN‘s Shark Specialist Group who will be speaking at the American Association for the Advancement of Science Annual Conference in Boston on February 17.

“Of particular concern is the scalloped hammerhead shark, an iconic coastal species, which will be listed on the 2008 IUCN Red List as globally ‘endangered’ due to overfishing and high demand for its valuable fins in the shark fin trade,” added Baum, who is an NSERC Postdoctoral Fellow at Scripps Institution of Oceanography 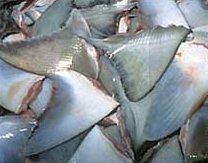 As weird as this may seem, fishing for sharks in international waters is unrestricted! How could things be any good this way? Many people (although it’s hard to call them this way) shark finning (the practice of removing only a shark’s fins and dumping the still live but now helpless shark into the ocean to die) is something of upmost cruelty, and this has to stop! It is estimated that 100 million sharks annually are killed for their fins alone. What would happen if in some country human soup becomes a delicacy? Would the world turn away its head? Without it, the shark just goes to the bottom of the ocean where it dies. Such a dreadful death for such a magnificent creature… to think that when their body hits the water again that they will be safe, only to realize that they can no longer swim, and end up dying in an ocean, which was just moments earlier their safe haven, and is now their doom. This has to be stopped! Here’s a list of things you can do, if you want to get even a bit involved.