Chernobyl has turned into a thriving habitat for hundreds of species

The environmental pressure generated by humans is larger than a nuclear explosion -- a revealing vision of the type of impact we're having on the world.

Without disruptive human activity, the ‘exclusion zone’ of Chernobyl has become a green oasis teeming with life. Defying expectations, the heavily irradiated area has become a vibrant wildlife hub.

The fateful day of 26 April, 1986, will forever remain in history as the date of the disastrous Chernobyl explosion. The largest nuclear accident in history, the Chernobyl explosion emitted more than 400 times the radiation from the bomb dropped over Hiroshima during World War II. It’s unclear just how many people were killed directly and indirectly by the event, but the kill count is huge. More than 350,000 people were evacuated from the site and never returned.

The environment was also dramatically affected by the explosion. The infamous “Red Forest” was closest to the nuclear plant, and took the brunt of the radiation. Almost all its trees were killed by the radiation, with the leaves turning red (hence the name). All but a handful of animals were also killed, and the survivors all had taken high doses of radiation. Most scientists believed that the area would be abandoned by wildlife, becoming a ‘desert’ for centuries.

Just 33 years after the explosion, the area is inhabited by over 200 species, including bison, brown bears, lynxes, horses, and countless birds. Even with all the radiation, the lack of human activity was enough to spur a thriving ecosystem.

The area around Chernobyl is not exactly a safe space. There’s still a dangerous amount of radiation, and spending more than a day or two can be quite risky. However, several groups of scientists were curious to see how the wildlife at Chernobyl was faring. After all, it’s a rare chance to study a unique environment, with conditions that aren’t present anywhere else in the world.

In Portsmouth, England, about 30 researchers from Europe met up to present their results on the wildlife in Chernobyl. It all pointed to the same thing: the environment seemed to have recovered greatly and life there had started to develop adaptations to living in high levels of radiation. For instance, researchers studying amphibians, one of the more delicate groups of creatures, have observed well-established communities in the area, which are showing some signs of adaptations, such as turning darker.

Motion cameras installed in the area have also captured images of large mammals such as bison, wolves, moose, and even horses (Przewalski horses, the world’s last free horses), which seem to be doing fine and increasing in numbers despite the radiation levels in the exclusion area.

However, that’s not to say that the radiation doesn’t have a negative effect. Insects tend to have a shorter lifespan in the area, and some birds are showing higher rates of albinism and physical malformations. 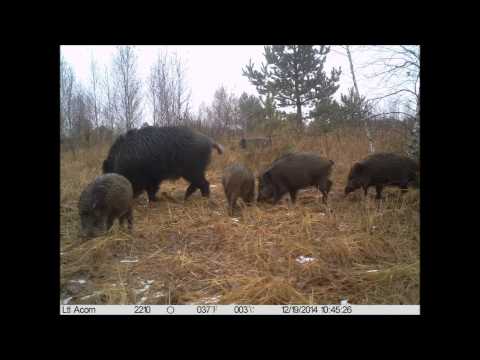 Images taken with some of the camera traps reveal stunningly active animal communities.

It’s not exactly clear why the animals around Chernobyl are doing so well, although researchers have a few theories. The first one is that animals are simply more resilient to radiation than anticipated, or they are developing adaptations much faster than expected. This would be great news — but the other theory isn’t nearly as optimistic.

Simply put, what makes Chernobyl different nowadays is the presence of radiation and the absence of humans. If the animals are doing better than in other parts of the world, it could mean that the environmental pressure generated by humans is larger than a nuclear explosion — a revealing vision of the type of impact we’re having on the world.

The future of Chernobyl

It’s not exactly clear what will happen to the area now. It’s still a contaminated area, but in recent years, interest regarding Chernobyl has spiked from more than one group. Scientists are interested in studying it because it serves as a natural laboratory. The site has also developed into a bit of a tourist attraction, for small groups interested in a different kind of experience. Officially, some 70,000 tourists have visited the area in 2018 alone, though the real number is likely much higher. There are also plans for developing a solar panel field in the area, as well as expanding forestry. Last year, there was even an art gallery and a techno party inside of Pripyat, the now-abandoned city which hosted Chernobyl.

As weird as it sounds, in the long run, we might have to think of ways to conserve the thriving wildlife in Chernobyl and ensure that this unlikely oasis continues to survive without human interference.