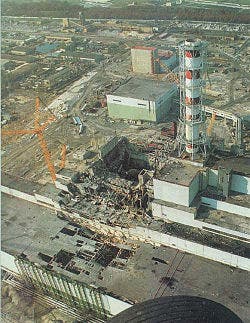 You know Chernobyl, right? The place of the biggest nuclear accident in the world? The are is so radioactive nobody lives in the vicinity anymore, and nearby plants are suffering major amounts of radiation. However, not everybody is sad about this event; a type of fungi (mushrooms) possess an ability beyond imagination: they can take the lethal radiation and use it as a source of energy to feed and grow. Researchers have called them radiotrophic fungus.

For some 500 million years, fungi have been inhabiting this planet, feeding on whatever they could finding, filling every biological niche they could find. But who could have actually guessed that they could feed on nuclear radiation? Researchers from the Albert Einstein College of Medicine (AEC) had a hunch, and they investigated it to test. They first got the idea after reading that samples brought from Chernobyl were filled with some black fungi growing on it.

“I found that very interesting and began discussing with colleagues whether these fungi might be using the radiation emissions as an energy source,” explained Casadevall.

Casadevall and his co-researchers then set about performing a variety of tests using several different fungi; two types of mushrooms were used, one that had naturally contains melanin, and one that was injected with the substance. They were then exposed to radiation levels 500 times bigger than the normal ones. The result? Both of them grew much faster than they would normally when exposed to radiation.

“Just as the pigment chlorophyll converts sunlight into chemical energy that allows green plants to live and grow, our research suggests that melanin can use a different portion of the electromagnetic spectrum – ionizing radiation – to benefit the fungi containing it,” said co-researcher Ekaterina Dadachova.

They took the research one step further and found some extremely interesting answers, which raise more questions. The melanin in these radiotrophic fungi is chemically identical to the melanin in our own bodies, and this led them to believe that it could be actually providing energy for skin cells. Perhaps even more interesting, this find has a special importance for space missions.

“Since ionizing radiation is prevalent in outer space, astronauts might be able to rely on fungi as an inexhaustible food source on long missions or for colonizing other planets,” noted Dadachova.