by Mihai Andrei
in Biology, Environmental Issues, Oceanography
A A 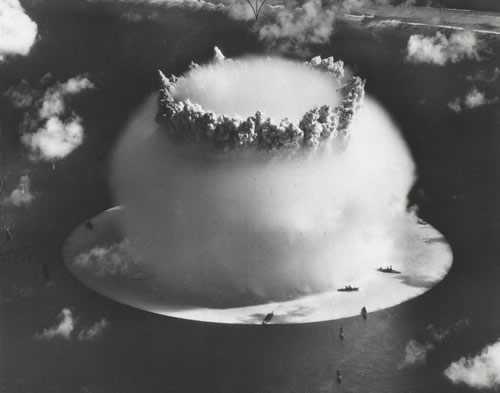 Bikini Atoll (also known as Pikinni Atoll) is an uninhabited 2.3-square-mile (6.0 km²) atoll in one of the Micronesian Islands in the Pacific Ocean. Its historical importance lies in the fact that along with more than 20 nuclear weapons tests between 1946 and 1958, the world’s first test of a practical dry fuel hydrogen bomb took place.Now, more than 50 years later, after the devastating earth shattering nuclear blast, the corals are flourishing again. Some coral species, however, appear to be locally extinct. These extraordinary results were developed by an international team of scientists from Australia, Germany, Italy, Hawaii and the Marshall Islands. This is really surprising, as the Bravo Bomb that blew up there is the most powerful bomb ever exploded, a thousand times more powerful than the Hiroshima bomb; it raised temperatures to 55,000 degrees, shook islands 200 kilometers away and left a crater 2km wide and 73m deep as well as virtually destroyed a couple of islands.

Here’s what Zoe Richards of the ARC Centre of Excellence for Coral Reef Studies and James Cook University had to say:

“I didn’t know what to expect – some kind of moonscape perhaps. But it was incredible, huge matrices of branching Porites coral (up to 8 meters high) had established, creating thriving coral reef habitat. Throughout other parts of the lagoon it was awesome to see coral cover as high as 80 per cent and large tree-like branching coral formations with trunks 30cm thick. It was fascinating – I’ve never seen corals growing like trees outside of the Marshall Islands. The healthy condition of the coral at Bikini atoll today is proof of their resilience and ability to bounce back from massive disturbances, that is, if the reef is left undisturbed and there are healthy nearby reefs to source the recovery.”

However, it’s not all fun and games. A disturbingly significant number of species has dissapeared: 42.

“The missing corals are fragile lagoonal specialists – slender branching or leafy forms that you only find in the sheltered waters of a lagoon,” Zoe explains.

Because of its extraordinary situation, the Bikini Atoll is now part of a larger project to have northern Marshall Island Atolls World Heritage listed.