Progress in artificial leaf development made

by Tibi Puiu
in Environment, Environmental Issues, News, Renewable Energy
Reading Time: 3 mins read
A A
Share on FacebookShare on TwitterSubmit to Reddit

What nature seems to perform effortlessly with photosynthesis has proven to be an immense hurdle for scientists trying to mimic it with so called artificial leafs. In recent years, important breakthroughs have been made with this scope in mind, yet the artificial leaf is so inefficient at the moment that it’s absolutely not worth pursuing on a large scale. Researchers at Arizona State University report considerable advances toward perfecting a functional artificial leaf. 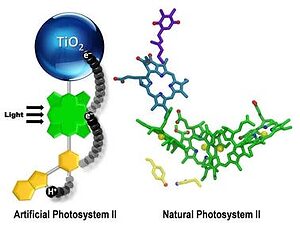 Plants are extremely efficient at taking carbon dioxide from the air and converting it into biomass using light as an energy source. What scientists are particularly interested in, however, is not in mitigating carbon but using an artificial photosynthesis-like process to break down water into its constituting molecules: hydrogen and oxygen. Hydrogen is one of the most powerful and easy to use fuels at our disposal, the problem is producing it. This is the whole basis of the “hydrogen economy” –  a platform that envisions a world where energy needs are met by hydrogen fuel, cheaply and cleanly obtained. Society requires a renewable source of fuel that is widely distributed, abundant, inexpensive and environmentally clean.

The thing is, as scientists first understood some decades ago, mimicking photosynthesis is a whole lot harder than it seems. The researchers took a closer look at how nature had overcome a related problem in the part of the photosynthetic process where water is oxidized to yield oxygen.

With this new found knowledge, the researchers constructed an artificial relay based on the natural counterpart. They then designed an artificial relay based on the natural one and were rewarded with a major improvement. X-ray crystallography and optical and magnetic resonance spectroscopy techniques were used to determine and characterize the interactions occurring between electrons and protons participating in the relay. There’s a rather solid theory on proton coupled electron transfer mechanism; with this theoretical work to guide them and the experimental data at hand, the Arizona scientists identified a unique structural feature of the relay. This was an unusually short bond between a hydrogen atom and a nitrogen atom that facilitates the correct working of the relay.

They also found subtle magnetic features of the electronic structure of the artificial relay that mirrored those found in the natural system.

Not only has the artificial system been improved, but the team understands better how the natural system works. This will be important as scientists develop the artificial leaf approach to sustainably harnessing the solar energy needed to provide the food, fuel and fiber that human needs are increasingly demanding.